The three Kims battle it out

The three Kims battle it out 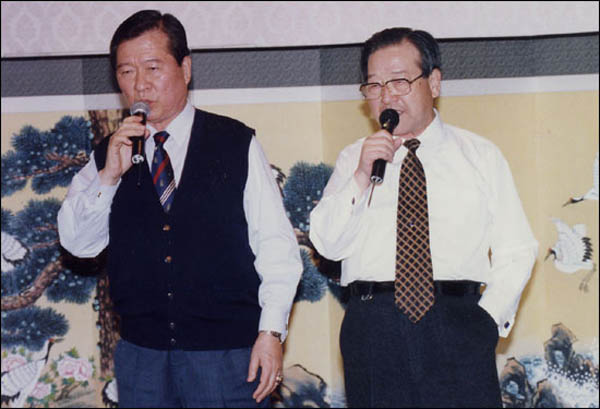 The 1997 presidential race kicked off on New Year’s Day. At the time, I served as one of the biggest influences on the political landscape, along with Kim Young-sam and Kim Dae-jung.

“The upcoming election will be the last battle among three of us,” I declared during my New Year’s address on Jan. 4, “It is the path we must take.”

Incumbent President Kim Young-sam was barred from seeking re-election under the Constitution but was strictly focused on thwarting archrival Kim Dae-jung from a victory at the polls. 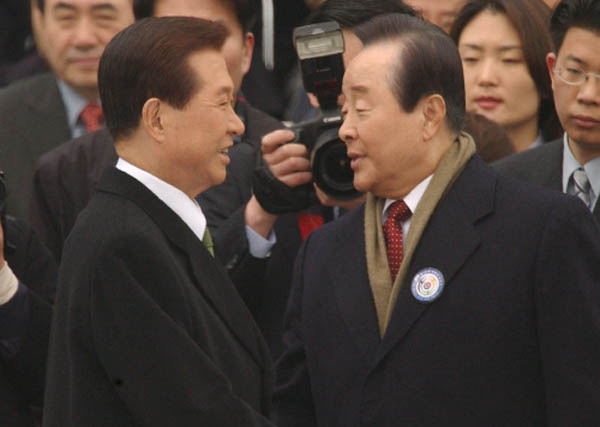 Kim Dae-jung, on the other hand, was overwhelmed by his desire to lead the country and had drawn me into his support base in the process.

For the next government, I proposed the introduction of a full parliamentary system. I was determined to adopt this system as president, or at least throw my full support behind a candidate willing to take my advice.

In the second half of the race, the contest was defined by my political alliance with Kim Dae-jung, and on Nov. 1, 1996, he and Kim Yong-hwan, my political chief of staff, met in secret to outline the tentative principles of an alliance together.

The two agreed that we should register Kim Dae-jung as the only opposition candidate on the condition that he amend the Constitution once elected president to make way for a parliamentary system.

The key was gauging how trustworthy he would be in making good on that promise.

But while talks were underway with Kim Dae-jung’s camp, I was contacted by Kim Young-sam’s aides. That said that the president would promise a constitutional revision to introduce a parliamentary system if I would guarantee my cooperation.

“The president still deeply regrets he could not stop you from leaving the [ruling] party,” one of his senior government officials relayed to me. “He had hoped to politically reunite with you by following through on a constitutional amendment.”

Even within my party, calls had grown that I stick with ruling party candidate Lee Hoi-chang, cited for his conservative values.

I felt Kim was being sincere in his offer to me, but I had already come too far with Kim Dae-jung to backpedal - and the president was already a lame duck. He was short of presidential authority to push for an amendment that would certainly draw backlash from Lee Hoi-chang, I thought.

But I still felt that I should know how the president and the ruling party would react to my proposal for a constitutional change.

“I’m willing to fully cooperate with President Kim if he leads efforts to amend the Constitution by holding a national referendum on the issue,” I said during a press conference on Sept. 5. “We may be able to postpone the election if necessary for the amendment.”

That was effectively my response to Kim’s offer. And yet, I never got a response from his circle, so I figured my proposal was off the table.

In the meantime, the Kim Dae-jung camp was growing increasingly anxious about winning my endorsement and messaged to say they were willing to accept all my demands.

On Oct. 25, my chief of staff and his counterpart, Han Gwang-ok, drafted a joint statement for a unified candidacy in which Kim Dae-jung would compete for the presidency and I would run in the prime ministerial race. We also agreed to complete the constitutional revision process by the end of December 1999.

But before signing the agreement, I wanted to meet face to face with Kim Dae-jung.

Kim Yong-hwan was my point man for negotiations and had a strong work ethic. He also wasn’t afraid to ask the hard questions.

“There is a rumor that you are prone to telling lies,” he said during his meeting with Kim Dae-jung. “Is that true, sir?”

“There were times when I couldn’t keep my promises because circumstances did not allow me to,” he said. “But I never lied to people.”

His answer was calculated, but still, it came across as genuine.

My party, the United Liberal Democrats, and Kim’s party, the National Congress for New Politics (NCNP), kept our talks behind closed doors in order to come to an agreement on a political coalition.

The NCNP nominated Kim Dae-jung to run in May but did not include a constitutional amendment as one of its main pledges. The NCNP was signaling it would not embrace the revision unless it had my full endorsement. Nevertheless, we were gradually cementing our cooperation and held joint rallies nationwide.

Democratic Freedom Party candidate Lee Hoi-chang saw his approval ratings plummet in the midst of allegations that his son had dodged the draft, and - shocked to find Kim leading the race - the ruling party went on a fierce offensive.

Kim was unfit to run the country due to his connections to the Communist bloc, the DFP argued. A few lawmakers also questioned how I could help a man facing such accusations, especially as a Korean War veteran who was at the center of a crusade against communists.

On Oct. 27, 1997, Kim Dae-jung visited my house and hugged me as he approached me in the garden - the first time he had ever shown any sort of personal affection.

We sat down on the floor in my living room, and he said to me, “Chairman Kim, I am here to humbly ask for your endorsement in the presidential election. Please sir!”

“I was actually thinking about helping you,” I responded. “I am aware that you were persecuted during the Park Chung Hee government, and I will make up for the suffering you faced.”

I recalled how Kim had been kidnapped in Tokyo in 1974 - a plan orchestrated by the national intelligence agency and carried out without President Park’s knowledge.

And even though I wasn’t directly responsible for his suffering, I knew I was the only one who could make up for the hardship he had endured on behalf of the President Park administration.

He smiled and thanked me profusely.

“Sir, when you become president, please introduce a parliamentary system,” I said. “Also, please build a memorial hall for President Park Chung Hee, as Korea would not have come this far had it not been for him. We would never have seen democracy had the country not undergone the economic growth he commanded.”

Kim answered without hesitation, promising to make good on those requests, and through that meeting, he and I finalized agreements that need no official stipulation, only mutual trust.

While Kim Young-sam had reneged on his promise to build a memorial hall for Park Chung Hee, Kim Dae-jung earmarked 20 billion won for its construction, which began in January 2002. The hall finally opened to the public in 2012 in Sangam-dong, western Seoul. Kim was ultimately elected president on Dec. 18, with 40.3 percent of the votes, beating out Lee Hoi-chang by a margin of 400,000 votes.