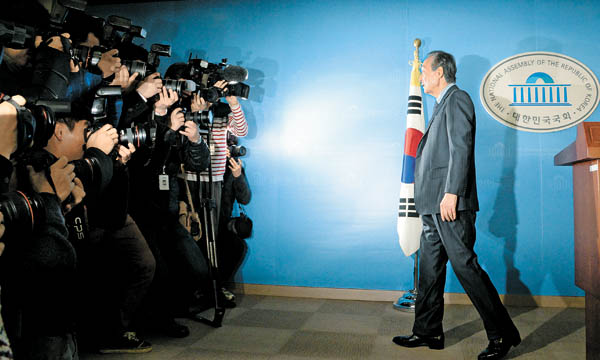 Kwon Rho-kap, right, a leader of the late President Kim Dae-jung loyalists’ faction, leaves a press conference in the National Assembly on Tuesday after he announced his defection from the main opposition party, now-called the Minjoo Party, of which he was a member for 55 years. [NEWSIS]

The main opposition Minjoo Party lost Tuesday an entire faction with a support base in the south as Kwon Rho-kap, an 85-year-old veteran, abandoned it.

Kwon, a senior advisor of the Minjoo Party, held a press conference at the National Assembly in the morning and announced his decision to leave the largest opposition party to protest the way Chairman Moon Jae-in runs the party.

Kwon said the Minjoo Party failed to take responsibility for its election defeats and give voters hope and faith that it can win the next presidential election. “Because I am certain that there is no hope, and because I have conscience, I am leaving,” he said.

Kwon, who started his career as a secretary to Kim in 1963, is a leader of a group known as the Donggyo-dong faction, named after the location of the late president’s residence. The faction is known to have strong support from voters in the so-called Honam region, which includes Gwangju and North and South Jeolla.

About 10 former lawmakers who are members of the faction also abandoned the Minjoo Party with Kwon, but only Kwon announced his decision formally to the press. Following the press conference, Kwon visited the National Cemetery and paid respects before Kim’s grave along with other Donggyo-dong faction members.

“It hurts very much,” Chairman Moon of the Minjoo Party said Tuesday about Kwon’s leaving. “The decision reflects the Honam voters’ sentiments and we will accept it humbly. We will work hard to truly build a new party.”

Kwon’s departure signaled the end of a political marriage within the Minjoo Party of the Donggyo-dong faction and another faction loyal to the late President Roh Moo-hyun. Moon is the leader of the Roh faction.

Since Roh won the presidential election in 2002 to succeed Kim, the two factions cohabited in the same party with varying degrees of happiness or unease. Animosity spiked after the Roh administration in 2003 agreed to an investigation into the allegation that the Kim administration had paid money to North Korea for the historic inter-Korean summit in 2000. During that investigation, key Donggyo-dong faction members including Kwon and Rep. Park Jie-won were arrested.

The Roh faction then labeled the Kim loyalists an obsolete political force and launched its own political party, the Uri Party, in November 2003.

In early 2008, the Donggyo-dong faction and the Roh loyalists reunited ahead of a general election. They worked together to support Moon in the 2012 presidential election, but he was defeated.

With Kwon’s departure, the Donggyo-dong faction formally ended its relationship with the Roh loyalists.

While the Minjoo Party lost the Donggyo-dong faction, Ahn Cheol-soo, a presidential hopeful who left the Minjoo Party last month and created the People’s Party, is after their support and that of Roh loyalists. On Tuesday, Ahn visited Bongha Village in Gimhae, South Gyeongsang, the hometown of the late President.

Ahn left the main opposition party on Dec. 13, 2015, after his demand for a new leadership election was repeatedly rejected by Moon. The two were rival candidates in the 2012 presidential elections. Ahn bitterly withdrew from the race after being continually outmaneuvered by Moon. Moon was narrowly defeated by Park Geun-hye.

At Bongha Village, Ahn met with Roh’s widow for about 30 minutes. Before paying a visit to Roh’s grave, several local residents stopped Ahn and criticized him for causing the split in the opposition party.

Ahn told reporters Tuesday that he had never criticized a particular faction and defended his power struggle with Moon as an attempt to bring about reforms.