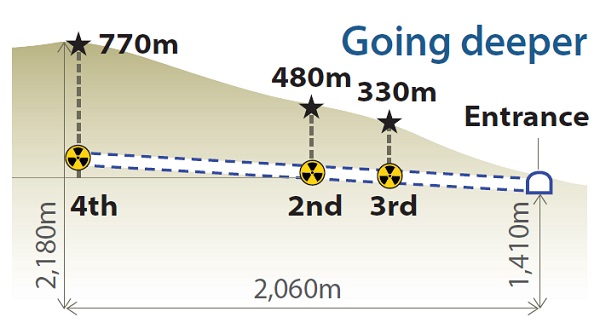 A comparison of underground detonation levels for North Korea’s last three nuclear tests. Each test was conducted at a diferent location. The graphic is to help readers understand the depth of underground testing sites and the distance from a tunnel entrance. [Source: Korea Institute of Geoscience and Mineral Resources]

North Korea conducted its fourth underground nuclear test last week far deeper into a mountain than in previous tests in 2009 and 2013.

According to the South Korean government, the North burrowed a tunnel 770 meters (2,526 feet) beneath the top of a peak at the Punggye-ri nuclear site, either to prevent contamination escaping the tunnel’s mouth or to prevent the weapon, which was supposed to be a powerful hydrogen bomb, from blowing out the tunnel.

“The site where North Korea detonated its nuclear bomb is 770 meters beneath the highest peak [of 2,180 meters] in Punggye-ri,” said Ji Hun-cheol, director of the geological survey team at the Korea Institute of Geoscience and Mineral Resources.

For North Korea’s third nuclear test in 2013, a bomb was detonated in a tunnel burrowed 330 meters beneath the peak of another mountain, while the second test was conducted at 480 meters beneath a mountain peak.

“The test this time was carried out at the location where the earth was much thicker than in previous tests,” added Ji.

Ji’s remarks are the first information on the depth of the detonation of the nuclear device on Jan. 6, which Pyongyang claims was a hydrogen bomb, a claim that has been met with skepticism due to a lack of evidence and the relatively small tremor caused by the test.

The much deeper underground tunnel, Ji said, could have been a measure to prevent the collapse of the tunnel after a more powerful explosion, such as an H-bomb detonation.

Or the tunnel was made longer to make the world think Pyongyang was worried about the size of a hydrogen bomb blast.

The size of the tremor created by the test argues against the hydrogen bomb claim.

According to Ji, the nuclear test generated a 4.8-magnitude tremor, which was actually smaller than the 4.9 magnitude generated by the 2013 nuclear test. Pyongyang said that test was of an atomic bomb.

The yield, or the total energy produced by the bomb, also contradicts Pyongyang’s claim.

It is estimated that the Wednesday test generated 6 kilotons of yield, which is less than the 8-kiloton yield of the third nuclear test in 2013.

The North’s second nuclear test in 2009 had 2-kiloton yield, and the first in 2006 yielded less than 1 kiloton of total energy. A yield of 1 kiloton can be approximately compared to 1,000 tons of TNT exploding.

In an H-bomb test by the Soviet Union in 1961, the yield produced by the destructive bomb known as “Czar Bomb” was estimated at 50,000 kilotons.

One government official involved in the assessment of the test last week told the JoongAng Ilbo that the government thinks Pyongyang carried out a failed hydrogen test after reviewing various scientific data and evidence. “We have reviewed a wide range of scientific data such as the strength of the seismic event and sound wave and the detonation location before coming up with the assessment [that it was a failed H-bomb test],” said the official, who spoke on the condition of anonymity.