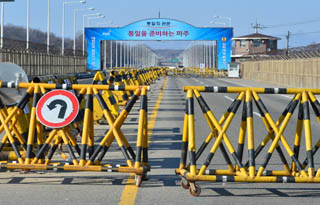 The Tongil Bridge leading to the North Korean city of Kaesong is barricaded on Tuesday after the Ministry of Unification limited the number of people allowed to stay overnight at the jointly operated Kaesong Industrial Complex. [NEWSIS]

The U.S. House of Representatives was expected to vote on legislation that would strengthen sanctions on North Korea, as nations involved in the six-party talks to denuclearize Pyongyang, push to come down hard on the isolationist regime over its fourth nuclear test on Jan. 6.

The North Korea Sanctions Enforcement Act, which has bipartisan support, was set to be put to a vote on Tuesday and uses targeted financial and economic pressures to block Kim Jong-un and his top officials from hard currency, and the assets they maintain in foreign banks.

Rep. Ed Royce of California, the Republican chairman of the House Foreign Affairs Committee, is the sponsor of the House bill, which was summited last February.

The bill mandates that North Korea and any country, entity or individual, facilitating its nuclear and ballistic missile programs are denied access to the U.S. financial system. It also prohibits banks and other institutions from providing financial services that facilitate North Korean proliferation, weapons trafficking, money laundering and human rights violations.

“Last week, North Korea conducted its fourth known nuclear test,” Royce said Monday on the House floor, warning that Pyongyang has developed increasingly destructive weapons such as miniaturized nuclear warheads that fit onto its most reliable missiles and submarines capable of launching those devices. “We cannot stand stand by and allow North Korea to continue to build an arsenal capable of striking the U.S.”

He called the bill, “the most comprehensive North Korea sanctions legislation” to come before the House, adding that the Barack Obama administration’s response thus far has been “dangerously weak.”

Royce recalled that the U.S. Treasury Department used a similar tactic to target the Macao-based Banco Delta Asia for its role in laundering money for North Korea.

“We cut it off from the U.S. financial system,” he said. “This led other banks in the region to shun North Korean business, financially isolating the regime.”

While this initially drained Pyongyang of its hard currency, Royce pointed out that the financial pressure was lifted prematurely. “We must go after Kim Jong-un’s illicit activities like we went after organized crime in the United States: Identify the network, interdict shipments and disrupt the flow of money,” he said.

The act also points out that the cooperation of China, as Pyongyang’s principal trading partner, is essential to the enforcement of UN Security Council resolutions and the protection of the international financial system.

However, there has been criticism that Beijing, in the aftermath of Pyongyang’s fourth nuclear test on Jan. 6, is not coming down strongly enough on the isolationist regime.

China initially seemed to be harsher on Pyongyang than previous nuclear tests. However, after a U.S B-52 strategic bomber escorted by fighter jets flew over the Korean Peninsula on Sunday to intimidate Pyongyang, Chinese Foreign Ministry spokesman Hong Lei said Beijing hoped “relevant parties can exercise restraint, act with caution and avoid ratcheting up tension.”

Those remarks were considered a return to its usual rhetoric defending Pyongyang.

Seoul in the meantime is working on reeling in Beijing and maintaining coordination with the United States and Japan.

“We believe that South Korea and China’s goals and principles on the North Korea nuclear issue are the same,” Foreign Ministry spokesman Cho June-hyuck said Tuesday. “This nuclear provocation by the North is a serious challenge for China, [and] I am aware that the Chinese government holds the position that North Korea will have to pay the corresponding price for its reckless acts.”