After baggage fiasco, still unclear who’s paying for it

After baggage fiasco, still unclear who’s paying for it 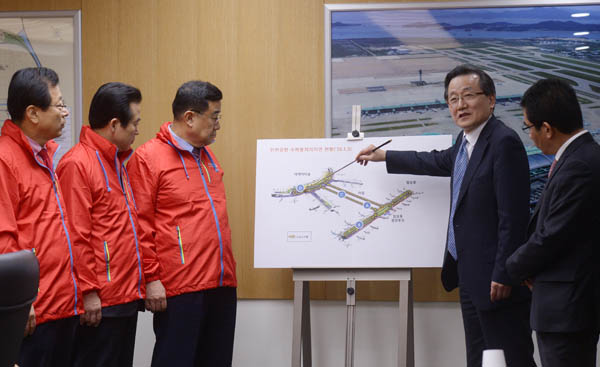 Acting President of the Incheon International Airport Corporation Lee Ho-jin, second from right, briefs workers on the baggage handling system, which broke down earlier this month, leading to delayed flights and missing luggage, on Tuesday. [NEWSIS]

Travelers’ luggage went missing for as many as three days at Incheon International Airport earlier this month, and though all bags eventually arrived, one question remains.

Who will pay for the mess?

The Incheon International Airport Corporation admitted on Tuesday that its baggage handling system failed, and the company took responsibility for the situation. The airport also said it could have dealt with the problem earlier by taking emergency measures, which it failed to do.

According to the JoongAng Ilbo, the airport allowed the situation to worsen by doing nothing for seven and a half hours after the problem was discovered.

Regardless of who’s at fault, the airlines are initially obligated to compensate their passengers for the delay because international laws don’t require airports to cover baggage issues.

Last week, however, the airlines announced plans to demand reimbursement from the airport, according to various local media reports.

Since its announcement of the system failure, many believe the airport will ultimately pay up, and it has already started negotiating with airlines over passenger compensation.

Industry insiders say that in this instance, compensation will be around $50 per passenger.

Airlines typically give passengers about $50 for every day their baggage is delayed so that they can buy necessities like a toothbrush or more underwear.

There are about 5,200 passengers who didn’t get their bags on time.

The baggage handling system at Incheon International Airport can handle around 12,600 pieces of outbound luggage per hour. But when it broke down, it was only handling 7,500 bags, far lower than its capacity.

On Jan. 3, a total of 159 flights were delayed because of problems getting bags loaded. In some cases, bags that were supposed to go to Washington, D.C., ended up in Hong Kong.

The airport said it will do everything that it can to improve the system this month, including adding more staff at the management center and workers who can manually transport bags if the system crashes again.