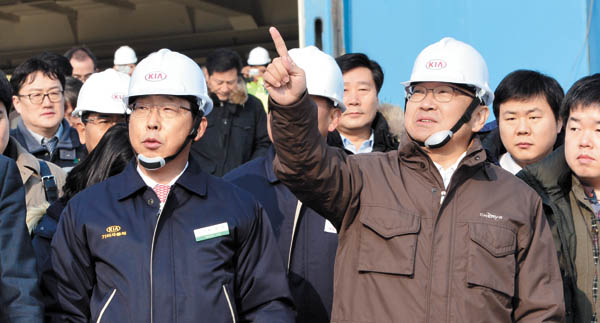 Finance Minister Yoo Il-ho, right, takes a walk with Kia Motors CEO Park Han-woo and the companies’ employees at the Pyeongtaek port in Gyeonggi where vehicles were getting ready to be loaded on a ship on Friday. [NEWSIS]

PYEONGTAEK, Gyeonggi - With a hard hat on, Finance Minister Yoo Il-ho showed up at the Pyeongtaek port in Gyeonggi early Friday morning, just as Kia cars were being readied for the ships that would take them to overseas markets.

Yoo listened to the hardships they face, such as delays in receiving government certificates of product origin and the lack of a bilateral trade agreement with South American countries, over warm bowls of porridge.

“Our new team will focus on looking for new export products and markets that will boost Korea’s overseas trade,” Yoo said. “Koreans have a certain DNA that allows us to turn adversity into opportunity.

Yoo’s visit to the port city came a day after he was officially sworn into office as the nation’s finance minister and deputy prime minister for the economy. At the event held Thursday at the Blue House, Yoo promised to focus on bolstering the country’s exports to achieve the targeted 3.1 percent economic growth.

Yoo’s plan was a marked change from predecessor Choi Kyung-hwan, who unveiled numerous policies the moment he took office in July 2014, including a supplementary budget, lowering the key interest rate and increasing tax cuts, aimed at pushing economic growth through expansion of the domestic market.

But during Choi’s tenure, Korea’s exports declined for 12 straight months. As the Korean economy is believed to have grown at around 2.7 percent in 2015, it became evident that were are limits to how much economic growth could be generated solely from the domestic market.

Yoo told the businessmen that he plans to encourage the expansion of online commerce, which will contribute to increasing exports.

“The government will utilize the Korea-China free-trade agreement and take advantage of Chinese consumer market, which amounts to $6 trillion,” the minister said.

Later that afternoon, exports were again one of the key issues discussed during Yoo’s first meeting with Bank of Korea Gov. Lee Ju-yeol at the Korea Federation of Banks’ club in Myeong-dong, central Seoul.

“When I was [in Pyeongtaek], it felt as if we really didn’t have to worry about exports,” Yoo told Lee. “But I get worried when I read the numbers.”

The finance minister added that he was concerned by the fact that exports in 2015 fell 7.2 percent year-on-year.

Lee told Yoo that during his recent visit to Basel in Switzerland to attend the Bank for International Settlements meeting, he learned that other countries consider Korea’s economy to be doing better relative to other nations.

“When I said that Korea’s economic recovery was weak, other participants asked what Korea was concerned about,” Lee said. “They meant [that perspective on an economy] is relative.”

Lee quickly added, however, that this didn’t mean that he or the finance minister was looking at the Korean economic situation with optimism.

“We both agreed that the economy is in a difficult state,” Yoo added. “We’re faced with a situation where the G2 risks and uncertainties in emerging markets are overlapping with North Korea’s nuclear test,” the finance minister said.

“We shared the view that we are at an important point in time where we need to overcome structural problems, including the changes in the global economic structure, changing population structure and weakening foundation of the domestic economy.”

Later that afternoon, Yoo left for China, which would be his first official visit overseas as the nation’s chief economic policy maker.

Yoo flew to Beijing, where he will be attending the official launch of the China-led Asian Infrastructure Investment Bank.