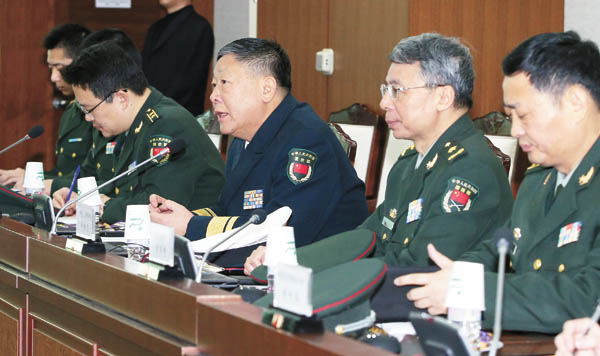 Beijing promised to back a United Nations Security Council resolution to impose sanctions on Pyongyang for its fourth nuclear test in defense talks in Seoul Friday.

South Korean and Chinese military officials held their first meeting since North Korea’s fourth nuclear test on Jan. 6 amid Seoul’s efforts to get Beijing to exert influence over Pyongyang.

This referred to an agreement reached in Beijing by members of the six-party talks on Sept. 19, 2005, on steps toward the denuclearization of the Korean Peninsula, considered the first major breakthrough reached by China, Japan, the United States, Russia and the two Koreas.

However, in late 2008, Pyongyang walked away from talks that were supposed to lead to the shutting down of its nuclear weapons program.

Yoon Soon-gu, director general of international policy at the Ministry of National Defense, led the South Korean delegation in talks with the Chinese officials headed by Guan as a part of the 15th annual bilateral working-level defense policy meeting held in Seoul.

China reaffirmed that it was completely opposed to North Korea’s development of nuclear weapons and conducting of nuclear tests.

The Defense Ministry official who took part in the defense meeting added, “There was also a mention of the fact that the countries that receive the most impact from the North Korean nuclear issue are South Korea and China.”

The previous day, the two countries’ chief nuclear envoys held talks in Beijing where Seoul urged China to play a stronger role in a tougher response to Pyongyang, in line with a televised address by President Park Geun-hye on Wednesday.

“China said that it is actively reviewing a draft UN Security Council resolution on North Korea’s fourth nuclear test with a sense of urgency,” said Hwang Friday in a press conference at the Korean Embassy in Beijing, in discussing his meeting with Vice Minister Li.

Hwang added that in his talks with Wu, the two sides agreed that “there is a need for a clear-cut response from the international community through a new Security Council sanctions resolution.”

Hwang evaded a question about whether China expressed concern over the deployment of a U.S.-led Terminal High Altitude Area Defense (Thaad) battery on the Korean Peninsula. “Generally, the Korean side’s interests were explained in detail, and China expressed its position,” he added.

On Wednesday, President Park said that deployment of the Thaad will be considered “based on our security and national interests and also by taking into account the North’s nuclear and missile threats.” This is considered her strongest public remark on the issue to date and has brought fresh attention to whether there will be any movement toward deployment of a Thaad battery in South Korea. In Washington, a senior White House official said at a security seminar Thursday that the Thaad missile defense system has a role to play in East Asia.

“If we see a need or if there is a desire among Japan or South Korea and the United States to cooperate and deploy those capabilities,” said Jon Wolfsthal, senior director for arms control and nonproliferation at the National Security Council, “we believe that there is a role for them both in deterrence and protection of forces.”

The U.S-led missile defense program is designed to shoot down missiles closer to their point of origin than South Korea is currently capable of.

Thaad’s deployment has been controversial because it comes with a radar system that can cover more than 1,000 kilometers (621 miles).

China and Russia have argued that it goes against their security interests and expressed concern that it may be used as a method of surveillance against them.