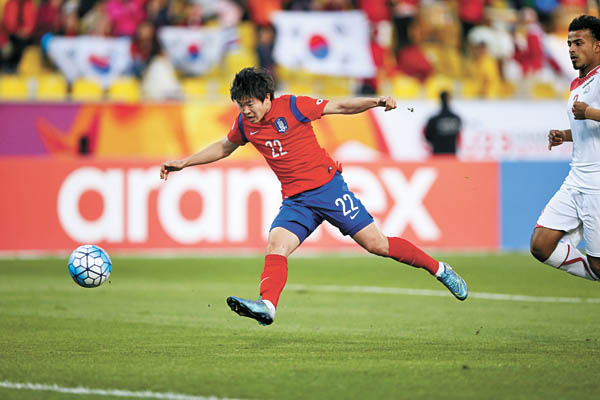 Korea’s Kwon Chang-hoon scored a hat trick to overwhelm Yemen 5-0 in the Olympic men’s football qualifiers on Saturday and advance to the quarter finals.

The Korean Under-23 team beat out Yemen over the weekend at Suhaim Bin Hamad Stadium in Doha, taking its second straight victory in the Asian Football Confederation (AFC) U-23 Championship, which also serves as the final round of the Asian qualifiers for the 2016 Summer Games in Rio de Janeiro.

The top three teams in the 16-nation tournament obtain a ticket to Brazil.

Korea, which is looking at its eighth consecutive appearance in the Summer Olympics since 1992, defeated Uzbekistan 2-1 on Wednesday; the victory over Yemen gives the team six points.

Korea’s next match will be against Iraq on Tuesday, when the team will vie for the No. 1 spot in Group C. Iraq previously defeated Yemen 2-0 and edged Uzbekistan 3-2 on Saturday, now placing second behind goal differential.

But the standout in the match against Yemen was undoubtedly Kwon, a midfielder who scored three goals in just 41 minutes and added an assist in the team’s 5-0 victory.

Kwon, who plays for the Suwon Samsung Bluewings, scored his first goal in the 14th minute after receiving a slick pass from striker Hwang Hee-chan inside the penalty box, striking the ball with his right foot to outdo Yemen’s goalkeeper Salem Al-Harsh.

Seventeen minutes later, Kwon scored again with a header, converting a cross from right-back Lee Seul-chan. The 21-year-old completed a hat trick in the 41st minute with a powerful right-foot shot, taking the pass from Bayer Leverkusen midfielder Ryu Seung-woo.

Going 3-for-3 in the first half seemed to be enough, but Kwon had more to show in the second.

In minute 72, Kwon this time assisted Ryu, who scored inside the box to give the team its fourth goal. Korea netted another just four minutes later after midfielder Kim Seung-jun received a pass from Park Yong-woo to finish with his right foot.

But despite a secure win, Kwon wanted more. In the minute 78, he penetrated to the center from the right side and curled the ball to the target, but the shot hit the crossbar with Al-Harsh barely touching the ball.

With three goals over seven matches playing for the senior national team under Uli Stielike, Kwon is considered the team’s ace, but has recently struggled with injury.

The 21-year-old has been undergoing rehabilitation since injuring his left foot in the K-League’s final match last year. He was focusing on physical therapy rather than group practice during team training sessions last month, and had yet to make a full recovery even after departing Korea.

Kwon played as a substitute in preparation matches in Dubai against the United Arab Emirates and Saudi Arabia, as well as Korea’s first Olympic qualifying match against Uzbekistan on Wednesday.

He is now the only player so far to have ever scored a hat trick for Korea in the final round of the Olympic qualifying tournament since 1992, when the under-23 age limit was adopted.

“He has been working on his recovery since he was injured in the final match of the K-League last year,” coach Shin Tae-yong was quoted as telling the Korea Football Association. “The match against Yemen was his final rehearsal. I told him to play the full 90 minutes even if he didn’t score.”

Korea’s 5-0 win on Saturday was also the team’s best result in the final round of the Olympic qualifiers since 1992, both in terms of goals scored and the largest margin.