When it comes to robots, where’s Korea?

When it comes to robots, where’s Korea? 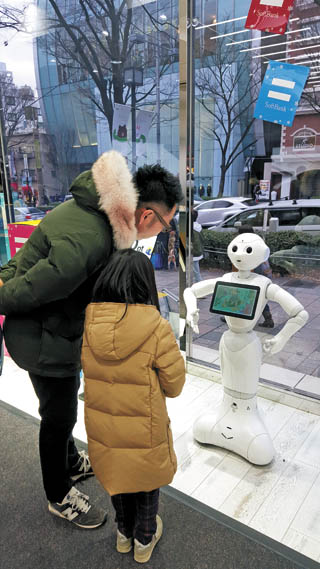 TOKYO - With slow, awkward steps, a robot the height of an elementary school student approached the reporter. It stared for roughly three seconds and then raised its arm, waving its hand.

It was the world-famous humanoid robot Asimo, developed by Japanese automaker Honda.

When the JoongAng Ilbo met the Asimo on Christmas Eve at the company’s headquarters in Minami-Aoyama, Tokyo, it did more than just walk and wave. It jumped around, hopped on one foot while bending its knee and even danced. It also spoke in sign language in response to music that was being played.

Honda jumped into the robotics industry earlier than its competitors, in 1986. The company had invested more than 300 billion won ($246.57 million) in developing robots by the time the first-generation Asimo was introduced in 2000. 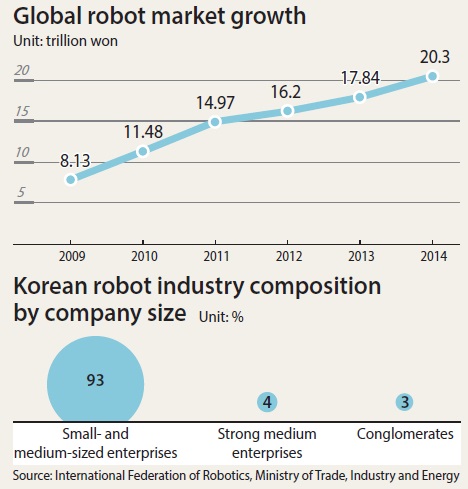 With those investments, the company was able to turn its long-time animated humanoid super-hero “Atom,” which provided a glimpse of future possibilities and helped Japan’s economy to flourish from the ashes of the World War II, into reality.

It also made the robotics industry one of the nation’s key future growth engines.

But the Asimo is more significant than just an advancement in robotics, as the technology used in its development has been extended to other business areas.

“We have applied the technology used on the robot also to our automobiles,” said Satoshi Shigemi, robot development supervisor in the Fundamental Technology Research Center at Honda, who also took part in the development process of Asimo. “The cognitive capability of the robot is one of the most important core technologies needed for autonomous vehicles.”

The robotics industry has expanded its influence on diverse sectors that now include nursing, cleaning, logistics, drones and automobiles. The size of the global market itself has grown from 8.1 trillion won in 2009 to 20 trillion won in 2014. That marks an average annual increase of 20 percent, which is why so many have been willing to jump into the market. Honda’s competitors now include Japanese company SoftBank, as well as Google and Amazon. 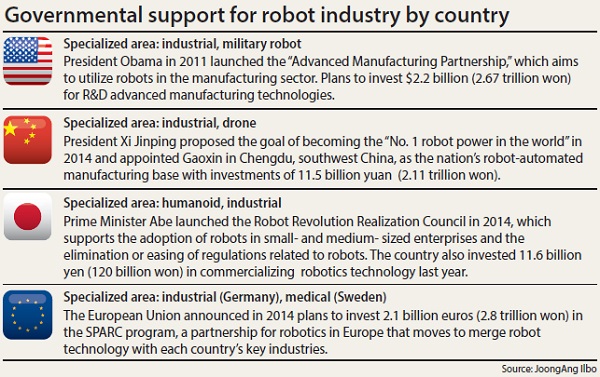 But while Korea is also home to some advance robotics technology - namely Kaist’s “HUBO” robot - the nation’s government hasn’t been as enthusiastic in its support of the industry’s development as many other countries.

“Major manufacturing industries such as automobiles, steel and shipbuilding, which have been fundamental to holding up the Korean economy, have reached their limit and have no new growth engines,” said Chung Jae-hoon, president of Korea Institute for Advancement of Technology.

Jung and others stress that securing competiveness in innovative industries like robotics is crucial, especially as the Korean economy is faced with its biggest challenge: falling potential growth caused by changes that include a fast-aging population, which is increasingly incapable of active participation in the economy.

“In order to keep Korea from being stuck as a developed country with a per capita income of $30,000, we need to raise our competitiveness by searching for innovative industries,” said Cho Yong-soo, head of LG Economic Research Institute’s Frontier Center.

Korea’s potential economic growth is estimated at around 3 percent, but it’s expected to drop to 1 percent by 2030.

“The thing about new growth industries is that they’re winner-take-all,” said Kang In-soo, head of Hyundai Research Institute. “We need to hurry to restructure industries so that we can focus on converging the major manufacturing areas in which we’re strong with information and communications technology.”

On that same Christmas Eve, a robot named Pepper was greeting customers at a Softbank mobile phone retail outlet along the crowded streets of the Ginza area of Tokyo. Pepper is a robot whose appearance from the waist up looks human, with a face and two arms. But unlike Asimo, it doesn’t have two legs. Instead, it glides around the floor on three wheels under a flat platform.

Pepper is a service robot with artificial intelligence. It is capable of 200 different actions, which include starting a simple conversation, playing games, dancing and reading books. Pepper debuted in June last year, and despite a price tag of 198,000 yen ($1,680), an average 1,000 units are bought every month.

At the Nescafe coffee shop in Harajuku, Tokyo, Pepper takes down coffee orders instead of a human employee.

“There are many customers who visit shops just to play with Pepper,” said Yusuke Abe, a public relations official from SoftBank. “Currently the production cost for each robot is higher than the sales price, and therefore it’s a financial loss for the company. But we keep investing with hopes of spreading the culture of robotics.”

Companies are fiercely competitive in their drive to develop new robotics technology because of the unlimited potential the industry possesses.

Robots have become indispensable in every industry, from industrial production to medical procedures.

They are also considered to be a means of dealing with the increasingly serious labor shortage in Korea, which has resulted from low birth rates and a rapidly aging population.

At the nation’s manufacturing plants, roughly 10 percent of the work is done by robots.

“We used to approach robots as a means of enhancing productivity and automating work processes to make things easier for humans,” said Lee Ki-in, Renault Samsung’s Busan plant manager. “But these days, robots have become a necessary part of the workforce that carry out high precision jobs that cannot be done by a person.”

Due to the ways in which robotics technology can impact different industries, some say it will lead to a new industrial revolution, creating the kinds of expansive changes seen with the development of information technology (IT).

“IT in the past was the catalyst for raising competitiveness in other industries as well as reducing production costs,” said Oh Sang-rok, a director general at Korea Institute of Science and Technology (KIST). “This role will be replaced by robots.”

Korea is considered a leader in the international robotics industry, largely thanks to the humanoid HUBO, seen by many as the only other bot that can compare to Honda’s Asimo.

HUBO was first introduced in 2004 by a team from Kaist, led by professor and director Oh Jun-ho.

Most humanoid robots can do little but fall if they lose their balance. HUBO, on the other hand, can handle complicated movements that include walking, jumping and dancing.

Last June, it even won the Darpa Robotics Challenge Finals 2015, a competition that tests a robot’s ability to complete difficult tasks relevant to disaster situations. HUBO finished all eight tasks in 44 minutes, about six minutes faster than the second-place competitor.

Korea even has its own version of Pepper in “MARU,” a humanoid robot capable of simple conversation and developed by Prof. Yoo Beom-jae at KIST.

But the problem is how to commercialize the technologies. While Korean universities and labs are centers of development, industry insiders say their robots are long ways out from being commercialized and becoming competitive in the global market.

“The size of the workforce and budget for research and development is only about one tenth of other countries like the United States and Japan,” said Oh. “There are only eight researchers involved in HUBO.

“Since robots require highly advanced technologies, we need more workforce and investment in R&D to make it to actual commercialization. The actual research environment is too tough for us to continue solely on our convictions.”

This is why experts are calling for a roadmap that could connect Korean technology developed at universities with the capital and commercializing power of the nation’s companies.

During his congratulatory speech at the World Robot Conference held last November in Beijing, Chinese President Xi Jinping declared that the robotics industry would become central to the country’s science and technology innovation efforts.

He wasn’t making false promises. At the end of 2014, China named Gaoxin in Chengdu, southwestern China, as the nation’s robot-automated manufacturing base and announced investments totaling 2.06 trillion yuan ($313 billion).

The Chinese government also selected the robot industry as one of its ten major industries in May last year. China has been busy bringing about the robotics revolution, and its performance is evident in the numbers.

Over the last 10 years, China managed to expand the robotics industry by 10 to 30 percent every year and has produced a large number of specialists in the field.

According to the International Federation of Robotics, an industry group concerned with commercial robotics, in 2013 China became the world’s biggest market for robots, knocking off longstanding No. 1 Japan.

Other advanced economies are also working hard to support the development of their robotics industries, and those efforts are bearing fruit.

Japan has shown exceptional results in its development of humanoid robots; the United States leads in the production of military robots; Germany is creating ever-better industrial robots; and Sweden is making strides in robots for medical use.

In the United States, President Barack Obama launched “Advanced Manufacturing Partnership” in 2011, which is a plan to use robots to further develop the nation’s manufacturing industry. The initiative sought to use industrial robots to bring U.S. manufacturing companies back home.

In Japan, Prime Minister Shinzo Abe personally established the Robot Revolution Realization Council in 2014 to boost the industry, easing or eliminating regulations that pose obstacles to implementing robotics technology. The government also invested 11.6 billion yen in the development of the robotics industry last year. Companies, universities, research centers and financial institutions are following the lead, supporting the adoption of robots in the workplace at smaller companies.

But what about Korea?

On the surface, at least, things don’t look so bad. The Korean government selected intelligent robotics businesses as one of its 10 growth engines for the future in 2004. In 2008, the government passed legislation that would boost the development of intelligent robots as well as their distribution.

But in reality, actual development has gone at a snail’s pace.

“Since 2003 as the government changed [in every election from conservative to liberal and then back again] we failed to lead the robot industry as a growth engine with persistency,” said Oh Sang-rok, from KIST. “We had the opportunity to become the No.1 by converging IT with robotics, but we failed to do so.”

Many experts say the problem is the lack of an overarching governmental strategy.

The robotics industry is managed by different departments that manage different areas, which requires a huge amount of coordination that oftentimes doesn’t take place.

“In order to develop a robot specializing in medical treatments including surgery and nursing, one needs to work with the Ministry of Health and Welfare. For agricultural robots, one needs to go to the Ministry of Agriculture, Food and Rural Affairs” said Baek Bong-hyun, executive director of policy planning at the Korea Institute for Robot Industry Advancement. “There is a limit because of the walls between different government departments.”

Lack of interest from Korean conglomerates is also considered a major problem in the advancement of Korea’s robotics technology.

Roughly 93 percent of companies that specializes in robotics are small and midsize companies. This is a stark contrast to other countries, where major IT companies like Microsoft, SoftBank and Amazon are investing huge amounts in the field.

“[Korean] conglomerates are relatively passive because they believe that the robotics market at this stage isn’t an active market,” said said Shin Kyung-chul, CEO of Yujin Robot, a company that manufactures cleaning robot iClebo.