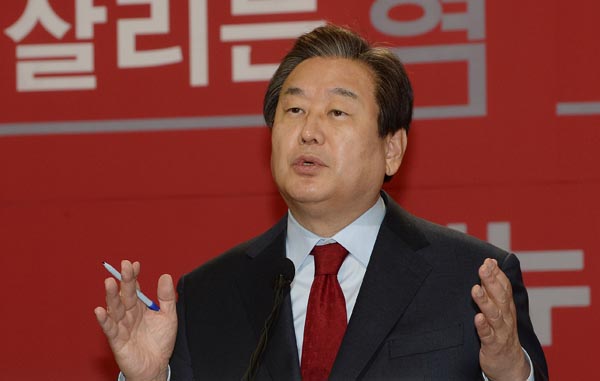 The ruling party chairman reiterated Monday his intention to field candidates - even contenders for proportional seats - through the primary, vowing to end the decades-old tradition of a “top-down” nomination system.

At his New Year’s press conference Monday morning to announce his vision for April’s general election, Saenuri Party Chairman Kim Moo-sung stressed that he would continue his experiment to overhaul the conservative ruling party’s nomination system, calling it the “final chapter of political reform and a revolution in our political history.”

The new nomination process, he said, will stop the few powerful people and political factions from influencing candidate selection. “As a result, factionalism will end in Korean politics,” he said.

Aspiring lawmakers as well as candidates running for proportional seats will be selected through a “bottom-up” system, Kim added.

Under the party’s constitution and regulations, applicants seeking to become proportional representatives must undergo certain scrutiny, the chairman said.

A public “jury” will evaluate the candidates to make a fair and transparent selection, he continued.

Until now, the Saenuri leader has been strongly influential in selecting the candidates seeking to become proportional representatives.

Kim said the ruling party will not make a special attempt to recruit new political blood, as the new nomination system would guarantee opportunities for talented individuals.

“Many prominent new political faces already registered as Saenuri Party candidates,” Kim said. “Of the 986 preliminary candidates registered with the National Election Commission as of Sunday, 584 are seeking to run on Saenuri tickets.”

The Saenuri chairman also made clear that loyalists to President Park Geun-hye would not be treated as exceptions in the primaries and expressed displeasure for having been labeled as an adversary of her supporters.

“I was in charge of President Park’s campaign,” Kim said. “It’s wrong to say I am an opponent of her loyalists.”

He also condemned the opposition parties’ attempt to hand out candidacies to prominent figures. “They are flowers in a vase,” Kim said. “But our candidates are alive, growing plants, who have roots in their regions.”

“Persuading someone with no political ambition and nominating them outside a democratic process is ultimately anti-democracy,” Kim said.

He declared that the party’s goal would be to win 180 seats - the minimum requirement to amend the way bills are processed under the National Assembly Act - criticized as the reason behind the current legislative standstill - adding that the Saenuri had no special election strategy. “Our strategy will be nominating candidates that the voters want through a 100-percent bottom-up nomination system,” he said.

The act engineers the need for compromise into the parliamentary process. A bill can only be put up for a parliamentary vote when three-fifths of lawmakers, or 180, consent to it. It also limits the majority party’s ability to railroad bills through the parliament.

The National Assembly Act as it stands, Kim continued, has paralyzed the legislature by requiring the opposition’s consensus for most bills.

“The Saenuri Party has drafted a revision, and we strongly demand that the National Assembly speaker introduce it for a vote,” he said.