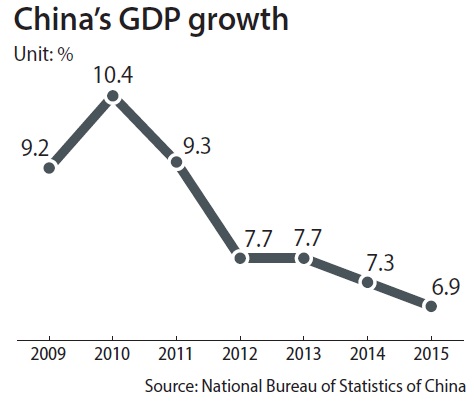 China’s economy slowed in December, capping the weakest quarter of growth since the 2009 global recession, as the Communist leadership struggles to manage a transition to consumer-led expansion.

Industrial production, retail sales and fixed-asset investment all slowed at the end of the year, while gross domestic product rose 6.8 percent in the fourth quarter from the same period of 2014. GDP increased 6.9 percent - the least since 1990 - for the full year, in line with the government’s target of about 7 percent.

After a roller coaster year incorporating yuan devaluation, a record plunge in foreign exchange reserves, and an equity rout that at one stage wiped out $5 trillion in value, stocks have plunged anew in 2016.

Global markets have been shaken by concerns as to whether policy makers can stem a slide in the traditional economic drivers of manufacturing and investment.

“Growth is still soft but it’s not collapsing,” said Shane Oliver, head of investment strategy and chief economist at AMP Capital Investors in Sydney. “Policy stimulus measures are helping but more is needed to help the economy as it transitions from a reliance on manufacturing and investment to services and consumption.”

“This may complicate the fragile balance between carrying out reforms and maintaining growth,” said Daili Wang, a Singapore-based economist at Roubini Global Economics. “Fourth quarter growth was a mere 1.6 percent quarter on quarter, with annualized growth at 6.4 percent, already lower than the 6.5 percent growth target,” citing his own calculations based on Tuesday’s data.

China’s economy is growing at two speeds, with old rust belt industries from steel to coal and cement in decline while consumption, services and technology do better. Underscoring that shift, services accounted for half of the economy last year, Premier Li Keqiang said Saturday, the first time it’s reached that milestone since the nation opened to the outside world in the late 1970s.

“Despite all of the drama, China generated some 40 percent of total world growth, and will do about the same this year,” said Kenneth Courtis, former Asia vice chairman at Goldman Sachs and now chairman of Starfort Holdings.

While the economy’s growth rate continued its steady grind lower, markets were anything but stable. Global markets were whipsawed in July and August by the stocks crash and ham-fisted rescue attempts and an unexpected yuan devaluation.

Policy makers are grappling with capital outflows that saw the nation’s foreign exchange reserves fall last year for the first time since 1992, ending an ascent that began under former top leader Deng Xiaoping and accelerated under presidents Jiang Zemin and Hu Jintao.

The policy response to last year’s slowdown included accelerated monetary easing with six interest rate cuts since late 2014, increased fiscal spending and a complex debt swap to make it cheaper for local governments to borrow. Through the turbulence, the central bank forged ahead with interest rate liberalization by removing a cap on deposit rates and won the International Monetary Fund’s approval for the yuan to enter its special drawing rights basket of reserve currencies.

“As we look back on 2015, it will mark the year that we really see market forces beginning to have an indelible impact on China’s financial system,” said Andrew Polk, an economist with the Conference Board in Beijing. “That is ironically despite the fact that regulators were attempting to control outcomes in a more concerted fashion and in more blatant ways than the past.”

This year, attention is likely to turn more to a new focus on supply-side reforms such as slashing excess industrial capacity and labor in state enterprises, cutting taxes and boosting productivity. In the meantime, leaders must grapple with the debt overhang from past stimulus, curbing their policy options.

“No other country faces such daunting structural challenges,” said Stephen Jen, co-founder of London-based hedge fund SLJ Macro Partners. “There may be volatility, but the long-term outlook of China remains quite certain. China is taking the short-term pain for long-term gain.” Bloomberg