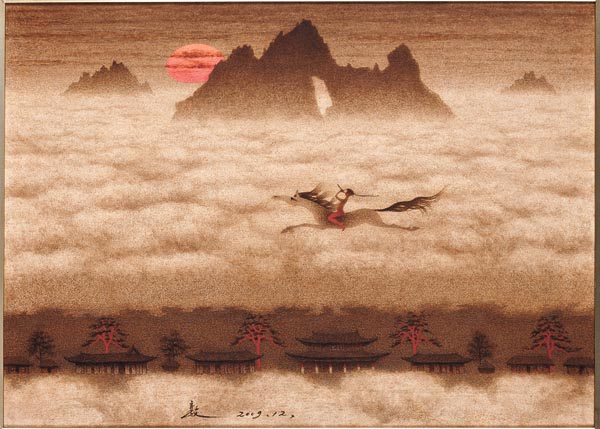 Veteran Korean painter Park Don, 87, is familiar to Korean literature lovers, as his paintings have appeared on the covers of many literary magazines and poetry books.

Of his lyrical paintings with Korean traditional motifs, 13 pieces are now on display at the KimDaljin Museum of Art Archives, located in Hongji-dong, central Seoul.

Along with the paintings on view are Park’s drawings, photographs he collected and referred to for his paintings, videos of his interviews, his past exhibition pamphlets and magazines with his paintings on the cover.

All the items on display were donated by the artist himself to the museum, which is a rare Korean private institution that houses a vast amount of documents and research materials related to fine art.

“The paintings on display encompass those created in the 1950s to the 2000s, so they can show the evolution of Park’s oeuvre at a glance,” Kim Da-jin, director and founder of the museum, said. “Knowing the importance of art archives, he donated his precious works and materials.”

One of the interesting documents on view are guestbooks from Park’s past exhibitions. The names include important figures in 20th-century Korean art history. Many are written so beautifully they could pass for calligraphy.