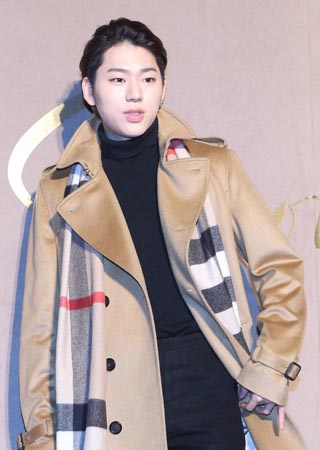 Zico, the frontman of K-pop boy group Block B, will release the ballad “It Was Love” on Monday.

For his first ballad song, Zico, who usually raps in Block B, is joined by Luna from the girl group f(x).

This is the first time for the K-pop star to release a ballad song since his debut in 2011.

Seven Seasons, which represents the seven-member boy group, said on Tuesday that “It Was Love” is one of the tracks on Zico’s upcoming digital single album.

“Zico and Luna have been singing different genres, but you may expect a lot from the two because their collaboration is fresh and new,” the agency said in a press release.

Zico is acclaimed by music critics and industry insiders for his songwriting. He has been producing, writing and composing songs for many of Block B’s previous albums, while Luna is known for her vocal skills.

When Luna appeared last May on the popular reality TV show “King of Mask Singers,” in which celebrities show off their vocal skills while covering their faces, regular guests of the show praised her voice.