Despite skeptics, Bitcoin comes to Korea

Despite skeptics, Bitcoin comes to Korea

While the prospects of the digital currency Bitcoin are up in the air with a dispute among its core developers, Korea has seen the arrival of the first wave of ATM machines designed to facilitate bitcoin-based transactions.

Until recently, only a handful of the machines have been tried in select parts of the country. But a recent surge helmed by Nautilus Hyosung, an IT infrastructure developer under Hyosung Group, has led to the installation of nearly 7,000 Bitcoin ATMs convenience stores and subway stations across Korea.

The virtual currency is most useful for those who need to send money overseas, as Bitcoin ATMs allow users to transfer money abroad within three to five minutes.

But Bitcoins are less ideal if a user is looking for broad availability and cheaper transaction fees.

The first step to using Bitcoins is downloading a smartphone application called Coinplug. For a first-time user, the app requires identification via smartphone and e-mail account.

After verification, the app provides QR code and asks a user to set four digit password that can be used in future transactions.

The user then receives the number for their Bitcoin account, which automatically converts any money deposited into the virtual currency. 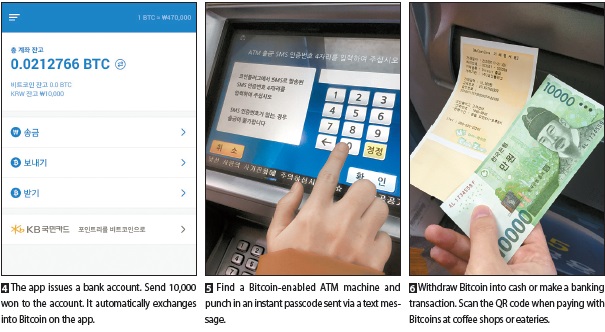 At the specialized ATMs, minimum transactions were set at 10,000 won and commission fees are 1,500 won, compared to traditional banks that usually charge less than 1,000 won.

In order to withdraw money, the ATM machine will ask for the four-digit password and another authorization code number sent to the cell phone, which will allow the user to withdraw in the local currency of the machine.

Bitcoins can be attractive for users who often need to send money abroad, because the transfers take only a few minutes and don’t involve extra commission fees for exchanging currencies, but it’s unclear whether the advantages will outweigh the disadvantages for local customers.

One of the main downsides to Bitcoins is the lack of participation by Korean retailers. Currently, only 120 stores and restaurants accept Bitcoins.

“For the past six months, not a single order was made through Bitcoin,” said Lim Sang-woo, an owner of New York Hot Dog & Coffee in Hanyang Cyber University, an affiliated franchise.

Observers point out that there is little demand in the country for Bitcoin service.

“Other alternatives like mobile payments keep expanding the user base because there is demand,” said an industry source. “As for the Bitcoin, however, there is no sizable demand. There is only speculative demand.”

Bitcoin’s price index rose by 37 percent last year according to CoinDesk, an online site dedicated to the currency.

But the primary reason behind the rise is attributed to the potential of the underlying software used in Bitcoins rather than commercial aspects of the currency itself.

The ongoing struggle between prominent Bitcoin developers further clouds the currency’s prospects. Mike Hearn, a British computer programmer and key Bitcoin developer, said he is leaving Bitcoin behind because of disappointment with factional fights between key Bitcoin figures.

“Bitcoin has gone from being a transparent and open community to one that is dominated by rampant censorship and attacks on Bitcoiners by other Bitcoiners,” he said on his blog.