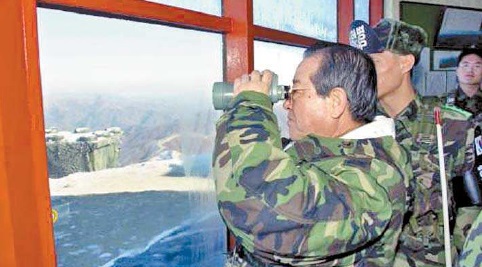 Prime Minister Kim Jong-pil looks into North Korea with binoculars during a visit to an eastern frontline unit on Dec. 9, 1998. [KIM JONG-PIL]

From the beginning of his presidency, President Kim Dae-jung ambitiously pushed his so-called Sunshine Policy, a name derived from one of Aesop’s fables. In the fable, wind and sun competed to make a man wearing a coat take it off. The more the wind blew, the tighter the man pulled his coat around him. The sun shone gently on the man, and he took off the coat. The lesson was that kindness can be stronger than severity and the Kim Dae-jung government launched a far-reaching aid project for North Korea. In June 1998, Hyundai Group founder Chung Ju-yung visited the North and brought 500 cows with him across the border.

I was the first prime minister for the Kim government. But I found many aspects of the Sunshine Policy contradicting my own view of the Communist state. As far as I knew, the Pyongyang regime was not the type that could easily be won over. When North Korea founder Kim Il Sung died in July 1994, North Korea analysts anticipated a huge exodus of North Korean refugees into China, but that didn’t happen. It was a huge mistake to think that the North wouldn’t last long simply because of its repeated pleas for outside assistance. The Kim dynasty was far more capable of running and sustaining its system than we ever expected. To think it would have no choice but to accept reform and change in order to benefit from the engagement policy was tantamount to an illusion.

The Kim government was stubborn when it came to its North Korea policy, refusing to heed any critical opinions of it. During my visit to an eastern frontline military unit in December 1998, I said, “Some people who handle North Korea policy are under the illusion that we will be reunited inevitably because we are the same people. North Korea is an enemy state of ours. We have to keep in mind that the North Korean army is a massive group of people ready to provoke us at any time. We must reject the wishful thinking that they will embrace peace and stability just because we embrace them.” 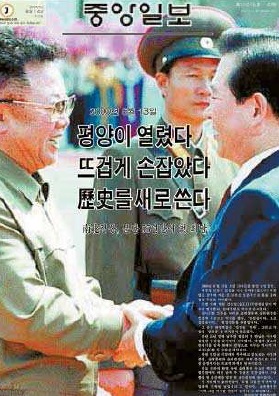 The front page of the JoongAng Ilbo on June 14, 2000 on the historic greeting between President Kim Dae-jung and North Korean leader Kim Jong-il at Sunan Airport in Pyongyang. [JOONGANG PHOTO]

Despite Seoul’s continued efforts to engage Pyongyang, the military provocations continued. Pyongyang infiltrated spy submarines and espionage agents across the border and fired a long-range ballistic missile. In June 1999, navy ships of both sides clashed. Nevertheless, the Kim government insisted on its Sunshine Policy.

After I resigned as prime minister, President Kim made the so-called “Berlin Declaration” during a visit to Germany in March 2000. He proposed Seoul and Pyongyang exchange special envoys in return for Seoul’s building of basic social infrastructure in the North. It was a fresh overture to the North because the Sunshine Policy hadn’t yielded the results he had expected. But criticism erupted that he was rushing his North Korea policy. I also voiced my concern over the sudden overture.

With the Berlin Declaration providing momentum, the two sides accelerated bilateral talks to arrange the first summit of their leaders. On April 10, 2000, four days before a general election, the Kim government made the bombshell announcement that South and North Korea would hold their first summit in Pyongyang in June.

There was no doubt that having the leaders of the two Koreas sit across a table from each other would be an historic moment. President Kim was overwhelmed with excitement and joy when he firmly grasped Kim Jong-il’s hands upon his arrival at Sunan Airport in Pyongyang on June 13, 2000. Following a series of meetings, the two produced the June 15 South-North Joint Declaration on June 15.

The crux of the agreement was in its first and second clause. The first clause stipulates: “The South and the North have agreed to resolve the question of reunification independently and through the joint efforts of the Korean people, who are the masters of the country.” The second reads: “For the achievement of reunification, we have agreed that there is a common element in the South’s concept of a confederation and the North’s formula for a loose form of federation. The South and the North agreed to promote reunification in that direction.” I watched the summit meetings unfold in front of a television in Seoul.

After his return to Seoul, Kim invited me and my wife Young-ok for a dinner at the Blue House on June 20, which was my first encounter with him in five months. Welcoming me, Kim said with a smile, “I felt pretty lonely without you.”

I replied, “You pulled off a major feat this time.”

Kim told me in greater detail of the progress he had made with Kim Jong-il during his stay in Pyongyang.

I told him, “I hope that agreement could lay down a path for the two sides toward an era of reconciliation.”

But in fact, I disagreed with the second clause of the agreement. If the two Koreas are reunified with different political systems, the problems in such a dual system would be enormous. I was firm in my belief that reunification would be complete only under one form of government as Italy had done in the 19th century.

The pursuit of reunification is a matter that calls for thorough contemplation and a long view. It should not be tackled with simple optimism or the illusion that the North could simply open up to the South and the outside world after a prolonged period of engagement. We need to be patient in waiting for change within the Pyongyang regime over the long run. Suppose we have a day of reunification suddenly and have to live with 20 million fellow citizens in the North. It wouldn’t be stretch to say half of our national income would be spent on assisting the North in a reunified Korea. I wonder how people would react to a government decision to take away half of their incomes just to nurture the North’s basket case of an economy.

A president should not be in a hurry to complete his or her North Korea policy during a single five-year term. We should wait and see what changes occur in the North as time goes by. For a considerable period of time, Seoul must spend its energy on strengthening our national power. West Germany achieved a peaceful reunification because it had the capacity to embrace East Germany. And West Germans were not hesitant to pour their money into reinvigorating the moribund economy of the East and elevating the standard of living of East Germans.

Former President Kim Dae-jung prided himself on moving the country a step closer to reunification. In fact, nothing has changed much since his summit 16 years ago. But Kim had the honor of winning the Nobel Peace Prize in December 2000. That was the real fruit of his tireless efforts to engage North Korea.