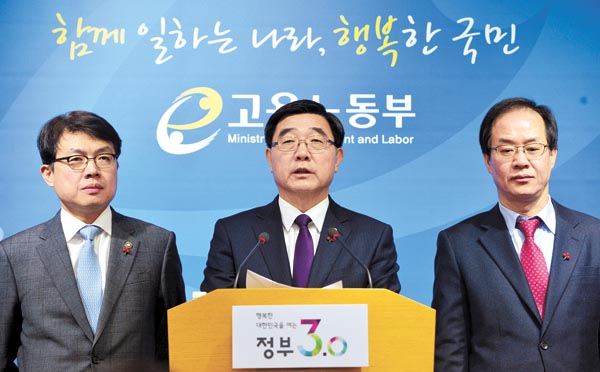 The Ministry of Employment and Labor on Friday finalized its guidelines on two controversial issues involving employee dismissals and wage revisions, raising the ire of labor unions that vow to oppose the rules.

“The ministry has confirmed the two guidelines that we have been preparing for more than a year,” said Employment Minister Lee Ki-kweon at an emergency press conference at the Sejong Government Complex.

“The guidelines will serve as a compass for extending the retirement age to 60 and a safety net that can prevent unfair dismissals.”

One guideline involves fair recruitment and dismissal. The government is urging employers to hire workers based on working abilities rather than academic background and test scores. It also includes the establishment of a fair evaluation and promotion system.

The other guideline allows companies to revise their wage systems without the consent of labor, if the revision is considered reasonable.

When it comes to assessing what is reasonable, the government will take into account disadvantages for employees, improvements in other working conditions, whether there has been sufficient discussion between labor and management and similar cases within an industry.

The labor side has been arguing that this guideline will make it easier for management to alter company rules to the detriment of working conditions.

The guidelines will have a significant impact on the labor market, allowing businesses to pay less to workers nearing retirement age and to lay off those considered incapable.

The government believes the plans will inject flexibility into the country’s rigid labor market, where regular workers, whose tenure is guaranteed by law, get higher salaries based on seniority, not on performance.

The two guidelines will be delivered to 47 regional offices of the Employment Ministry across the country on Monday and will be put into action immediately.

“Starting with the guidelines, the government will complete the labor market reform within this year,” Lee said.

The announcement comes just three days after labor declared it will break the agreement on the reforms made in September, accusing the government of trying to pull a fast one on the two sensitive issues.

The Federation of Korean Trade Unions (FKTU) said on Tuesday it was walking away from the September agreement and will not join talks with the government and companies.

The federation criticized the government for its attempt to unilaterally implement the guidelines by holding a forum with experts last year.

The Employment Ministry introduced an early draft of the two guidelines at a discussion with some 19 labor law experts on Dec. 30.

Both labor and management expressed concerns about the government’s announcement. “The new guidelines shouldn’t be a new regulation on personnel reshuffle at companies,” said the Korea Employers Federation in a statement on Friday.

“The government guidelines are against the law,” said the FKTU in a statement.

“We will order trade unions to reject the guidelines.”

The FKTU said it will stage a demonstration at Seoul Station at 1 p.m. on Friday.

Park Ji-soon, a labor law professor at Korea University who participated in the government-led discussion, said the guidelines are aimed at setting up a clear and specific evaluation system for both labor and management.

“From now on, the guidelines will become an objective and scientific standard that help both management and labor,” Park said.