Nation gets its first bobsleigh gold

Nation gets its first bobsleigh gold 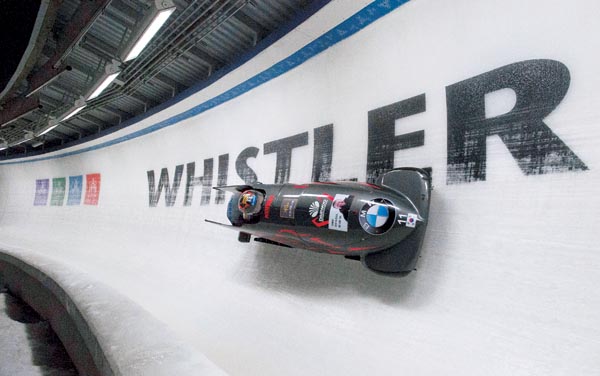 At the season’s fifth IBSF World Cup event, Won and Seo finished with 1 minute, 43.41 seconds after two races and shared the first place with Switzerland’s Rico Peter and Thomas Amrhein. Russia’s Alexander Kasjanov and Aleksei Pushkarev was third at just one hundredth of a second behind the two teams.

This was the first time an Asian team finished first place at the IBSF World Cup bobsleigh event.

The last performance notwithstanding, the duo has been producing impressive results this season, collecting medals in four out of six World Cup racing series so far. They collected Korea’s first ever World Cup medal in the season opener event in Altenberg, Germany in November and then collected two more bronze medals in Winterberg, Germany in December 2015 and Lake Placid, United States, earlier this month.

The victory also made pilot Won the first Korean to top the IBSF World Cup world rankings at 1,001 points, followed by Germany’s Nico Walther at 898 and Switzerland’s Rico Peter at 889.

“I’m happy, but at the same time I’m also bewildered,” Won was quoted as saying by the Korea Bobsleigh & Skeleton Federation (KBSF). “We are the ones who got the results, but there were so many people who put in the work to make it all possible.”

At the medal awards ceremony, Won and Seo dedicated their historic victory to late national team coach Malcolm “Gomer” Lloyd, who passed away earlier this month from cancer. Lloyd, who was 68, coached Korea from 2013.

Since the death of Lloyd, Won and Seo have been attaching stickers on their helmets and bobsleigh which read “Gomer, rest in peace. We love you.” At the ceremony, they were joined by Lloyd’s wife, Jeannie Godfrey, who handed the special medals to the Koreans and encouraged them on behalf of her husband.

The result boosts Won and Seo’s medal hopes for the 2018 Pyeongchang Winter Games.

Both Won and Seo began bobsleigh when they were Sungkyul University students who were originally trying to become physical education teachers.

Meanwhile, Korean skeleton racer Yun Sung-bin finished third in his competition at Whistler on Sunday (Korean time). The 21-year-old clocked 1:45.24 to get his fifth medal in the six World Cup skeleton competitions this season.

Yun also moved up in his world rankings from No. 3 to No. 2 with 1,140 points. World No. 1 Martins Dukurs again won the series at 1:44.31, while his older brother Tomass finished second.