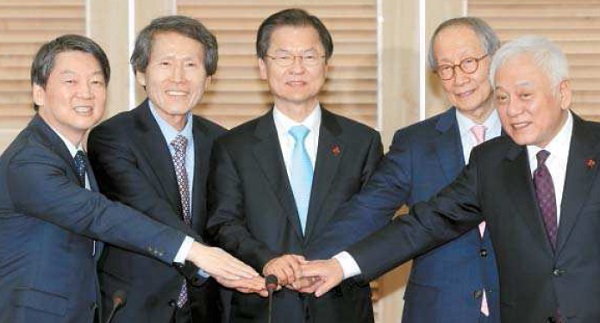 The merger also boosts Ahn’s party’s strength in Gwangju and the provinces of North and South Jeolla, intensifying his war against Moon Jae-in, leader of the main liberal opposition Minjoo Party of Korea.

Ahn and Chun held a joint press conference Monday morning at the National Assembly and announced their merger. The new party will use the name People’s Party.

“We agreed to the merger in order to stop the overwhelming victory of the Park Geun-hye administration and the Saenuri Party in the upcoming general election,” their joint statement said.

A five-point agreement, which included promises of intra-party democracy and the nomination of reform-minded and talented new blood for the April polls, was also announced.

While Ahn and Chun said their merger was to stop the conservative Saenuri Party from winning a majority in the April 13 general election, it was evident that their alliance signifies a significant setback to the main opposition party.

Both Ahn and Chun are political offspring of the Minjoo Party. They both have bitter histories with Minjoo Chairman Moon.

Ahn abandoned the main opposition party in December 2015 to create his own political group with an ambition to win at least 100 seats in the April election and eventually the presidency in 2017. The 53-year-old software tycoon-turned-politician ran in the 2012 race, competing with Moon for liberal votes. Less than a month before the election, he bitterly withdrew after being continually outmaneuvered by Moon. Moon was narrowly defeated by Park.

Chun left the main opposition party in March 2015. A former justice minister and veteran politician with strong ties to the Honam region, comprising Gwangju and the provinces of North and South Jeolla, Chun left the party after the Moon leadership refused to nominate him for a by-election in Gwangju Seo-B District. He ran independently and won to become a fifth-term lawmaker.

During the press conference, Ahn stressed that the party will continue efforts to unite other liberal politicians, but spoke ambiguously about forming an electoral alliance with the Minjoo Party to not compete against each other in races. In the past weeks, he adamantly rejected such an alliance.

Commenting on an observation that a liberal alliance without the Minjoo Party would become an alliance against it and its chairman, Ahn said, “An alliance is not simply a concept of political engineering. The most important thing is what we will achieve through an alliance.”

When asked why he chose to join forces with Ahn and not the Minjoo Party, Chun said he was pessimistic about the possibility that Minjoo leaders would actually surrender their power and reinvent the party.

“The People’s Party is in the process of creation, and I think I can work with them as long as we can push forward reform-minded values desired by the people,” he said.

Chun also downplayed speculation that he would be the new party’s chairman. “It’s something we will have to discuss during the process of the actual merger,” he said.

Rep. Kim Han-gill, a political heavyweight who left the Minjoo Party earlier this month, reportedly brokered the merger at a Sunday night meeting. Kim also participated in the press conference.

The merger is expected to add momentum to the People’s Party’s stalled campaign to recruit more lawmakers to form a so-called negotiation bloc in the National Assembly. With Chun joining, the party now has 16 lawmakers, just four shy of the requirement to form a bloc that can negotiate legislative calendars in the Assembly and be eligible for larger state subsidies.

If the party manages to woo three senior lawmakers who leave the Minjoo Party but remain independent, it will only need to recruit one more.

The Minjoo Party countered the merger of Ahn and Chun with an alliance with another minority liberal party. Moon met with Rep. Sim Sang-jung, chairwoman of the Justice Party, Monday morning and discussed an electoral alliance.

The Justice Party currently commands five seats in the National Assembly. It was established in 2012 by a group of progressive politicians who abandoned the now-disbanded Unified Progressive Party over a leadership election rigging scandal.

According to spokesmen of the two parties, Moon accepted Sim’s proposal to form a strategic consultative body for the liberals.

The continuing battle between Moon and Ahn has effectively made the general election a three-way race for now. While Ahn’s party secured more votes in the Gwangju and Jeolla regions by merging with Chun’s group, the liberal vote is destined to split, particularly in many key races in Seoul.

Of the 48 districts in Seoul, more than 20 are expected to have at least three candidates, representing the Saenuri Party, Minjoo Party and People’s Party. In the 2012 election, the Saenuri Party won only 16 seats and the Democratic Party, the predecessor of the Minjoo Party, won 30 seats.

A particularly heated race is expected in the Nowon C District of Seoul, currently represented by Ahn.

Lee Jun-seok, a 30-year-old entrepreneur who served on an emergency council to overhaul the fraying image of the Saenuri Party in 2011 and 2012, announced Sunday his bid for the Nowon C seat.

Lee said he was born and raised in Sanggye-dong of Nowon District, criticizing Ahn for carpetbagging in the district for his political ambitions. Ahn entered politics by scoring his first election victory in a 2013 Nowon C by-election. After a year as an independent lawmaker, he joined the main opposition party in March 2014, only to leave in December 2015.

Lee Dong-hak, a 33-year-old former member of the Minjoo Party’s innovation committee, also declared a bid for the seat.

Former two-term lawmaker Roh Hoe-chan, who once chaired the Justice Party, will also run in the district that he represented before Ahn.

Meanwhile, the Saenuri Party said Monday that it will hold a series of primaries to select general election candidates starting in mid-February. The process will be completed by mid-March.