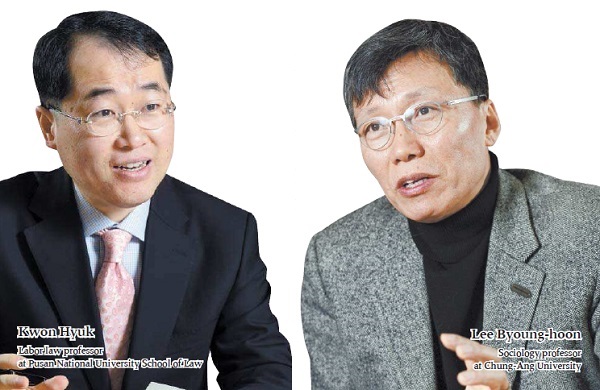 The power struggle among industrial unions, management leaders and the government intensified this month following the breakdown of a deal struck after nearly two decades of discussion.

The Federation of Korean Trade Unions on Jan. 19 walked away from a trilateral agreement finalized in September that concluded after 17 years of negotiations between the country’s labor and management leaders.

Then, just three days later, the Ministry of Employment and Labor announced new guidelines concerning two of the issues that had proven most controversial in talks - layoff requirements for underperforming workers and revisions to the salary system.

Labor circles, including the hard-line Korea Confederation of Trade Unions, said they will respond to the guidelines with mass strikes, as five labor reform bills remain pending in the legislature. 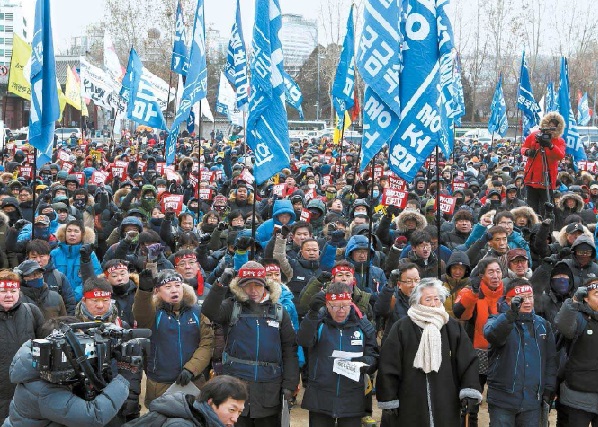 Union members participate in a rally hosted by the Korea Confederation of Trade Unions at Seoul Plaza, in central Seoul, a day after the government unveiled a set of guidelines on Friday on two controversial issues ?employee dismissals and wage revisions. [KIM CHOON-SIK]

To discuss possible solutions to labor reforms, the JoongAng Sunday recently sat down with Kwon Hyuk, a labor law professor at Pusan National University School of Law, and Lee Byoung-hoon, a sociology professor at Chung-Ang University.

The following is an edited version of the interview:

Q. The government announced Friday that it would begin enforcing guidelines on employee dismissals and wage revisions, two of the most controversial issues that have raised the ire of labor unions, which have vowed to oppose the rules.

A. Kwon Hyuk: The government cannot avoid the criticism that it is obsessed with pursuing tangible success. The two guidelines technically allow companies to lay off underperforming workers and revise wage systems more easily. But the government shouldn’t consider these guidelines a success given that implementing those guidelines does not equate to labor reform. The trilateral agreement and cooperation among labor leaders, management and government is necessary for labor reform to be truly effective.

Lee Byoung-hoon: The announcement was unilateral and lacking discussions in terms of administrative procedures. The government has argued that the guidelines have made layoff criteria tougher than before. But on a closer inspection, the guidelines are highly biased, and make layoffs more flexible with business demand. Easier layoffs mean employers in the private sector can impute the burdens of economic revitalization and job creation on to the employees.

These guidelines are also expected to intensify employment insecurity in Korea’s labor market. And for workplaces without unions, these regulations are essentially law. The managers at these companies are expected to enforce the guidelines, which will bring about massive opposition and lawsuits.

Kwon: These guidelines are just recommendations, which won’t result in legal disadvantages if employers choose not to follow them. I agree with the impact they will have at workplaces, though.

Labor-management dispute cases could drastically rise as companies cite the guidelines to lay off underperforming workers. All three parties should develop an employee evaluation measure on which both labor and management can agree. The government also has to show a willingness to continue to revise the guidelines over the next two to three years. It should also be prepared to scrap them if they don’t work in reality.

Why did the trilateral agreement break down?

Kwon: The three parties - the labor, management and the government - blame one another. The government led the conversation and failed to work strategically because it was so obsessed with completing its policy goals as soon as possible. And labor leaders failed to bring specific alternatives to the discussion table.

All parties viewed the discussion as a competition. Unemployed young people and non-regular workers should be protected by society. Trilateral talks were first introduced to discuss solutions for how to better protect these people, but it later turned into a confrontation, as if the traditional labor-management conflict has moved to this roundtable.

Lee: The three parties had different views on how to solve existing problems in the labor market, including youth unemployment, job insecurity for non-regular workers and the uneven distribution of compensation.

The government should have done a better job in mediating between labor and management, and it should have led the conversation to a solution. Instead, the government prioritized the requests of the private sector in its policy, under its mission to revive the economy. So the discussions became a tilted playing field. The government’s failure to mediate created trouble. The breakdown of trilateral talks showed how immature Korean society still is.

What is the most urgent labor reform?

Kwon: We have to pay attention to the fact that all three parties kept fighting against one another’s cause, instead of debating on the actual content.

Labor unions can’t drive home their point if management leaders and the government mention the high youth-unemployment rate. And the discussions can’t develop further if the labor considers overall labor reforms as simply making layoffs easier. That framework doesn’t help anyone come up with solutions.

A society without irregular jobs is desirable, of course. However, we have to acknowledge that these kinds of employment problems can’t be solved within a short period of time. The increase in irregular workers is not only a problem in Korea; it’s a global issue.

If not all irregular positions can be transferred into regular jobs, I think it’s better to take it slowly, step by step, by gradually closing the gap in employment benefits and wages. We can find ways to reduce the numbers of irregular employees.

All three parties agreed on the need for labor reforms, but discussions have since been blocked and the conversation moved on to how to actually carry out those reforms. It’s sad to see that the negotiators are now almost rejecting changes.

Lee: The two largest problems are the dual structure of the local labor market and employment insecurity.

In the Korean labor market, different rules exist between workers at conglomerates and smaller companies, and between young people and older people. The labor market should close the gap between salaried regular workers and irregular workers who work on contract, and the number of irregular jobs should be reduced. The lack of quality jobs is the primary reason for the high youth-unemployment rate right now. When it comes to the sheer number of jobs, there are plenty. How to create more quality jobs should be at the top of the reform agenda.

We also need to think about guaranteeing job security for workers, but I personally think the government doesn’t have a willingness to achieve this goal, nor is it capable of doing so.

It’s hard to actually come up with an alternative or an ultimate solution.

Lee: As Professor Kwon mentioned, the guidelines enable underperforming workers to be more easily let go, and employment instability in the Korean labor market is already high. Since the 1997 Asian financial crisis, local corporations have steadily reduced the revenue they share with their employees. So against this backdrop, why does the government expect workers to sacrifice for its campaign for economic revitalization?

It’s the same when it comes to enhancing conditions of irregular workers. Contract workers are already inferior. Not many volunteer to be contract workers. Most of them have no other choice but to work on contract, with lesser employment benefits than their salaried counterparts. Employers and the government should take this into consideration.

Kwon: The biggest problem in the current labor market is layoffs, oftentimes done in a sloppy way without clear rules or procedures. Most employers are not even aware of the fact that they can’t lay off employees verbally.

In this sense, the government should institutionalize such rules by implementing guidelines. So far, Korean society has considered revising layoff policies as taboo.

A social security system should also be developed for irregular workers since their employment status is already more vulnerable than salaried workers.

Labor reform is currently at a standstill. What will it take to resume the conversation again and how can that be accomplished?

Lee: A society-wide conversation and consensus needs to come first. Labor reform is something that affects the lives of all workers, and unilateral decisions come with huge social costs. If the three parties really want an overhaul, they have to facilitate a society-wide conversation that not only involves labor and management leaders, but also young job-seekers and irregular workers.

The conversation cannot continue if the government implements its own solutions rather than considering all the voices at its disposal. The talks should be balanced, and all participants should bring their own agenda and adjust it throughout the negotiations. Mediation is the only task the government should have.

Kwon: I agree with Professor Lee, regarding the need to include more players in labor talks.

It’s crucial for the participants to refrain from simply speaking up for their own interests. The talks should regard labor problems as a social issue and bring possible solutions to the table.

At the same time, the government should embrace workers, who in this equation are socially inferior. When it comes to labor reforms, how the discussion is carried out is more significant than bringing about a substantial outcome. The beginning of negotiations and even the breakdowns should be considered part of the reformation. Labor reform is an open-ended, long-term project that can take decades.

Lee: Labor reforms should be aimed at developing a Korean model for flexible job security.

Employers shouldn’t cling to the idea of minimizing employment and personnel costs, and labor should negotiate by giving up vested rights. Labor and management leaders have to find common ground by negotiating on the rules for reshuffles and the wage system following market fluctuations. Western countries like Germany have established win-win rules for labor and management.

Kwon: Labor reform is not about making the other party give in. The government always urges the private sector and individuals to follow its lead, but this is anachronistic. Labor reform in Korea should be based on the promise that each party continue to innovate.

Conflicts are inevitable in the conversation, but all three parties must understand that it is more of a problem if the public does not support the labor discussion.

The government loses power without public support. It’s the same for labor unions. Unlike the unions in the 1970s and ’80s, which had public support, current unions are criticized for aggressively pushing their demands on management, threatening to go on strike.

Employers should also fulfill their social responsibility so that company growth is sustainable.

Union members participate in a rally hosted by the Korea Confederation of Trade Unions at Seoul Plaza, in central Seoul, a day after the government unveiled a set of guidelines on Friday on two controversial issues - employee dismissals and wage revisions.