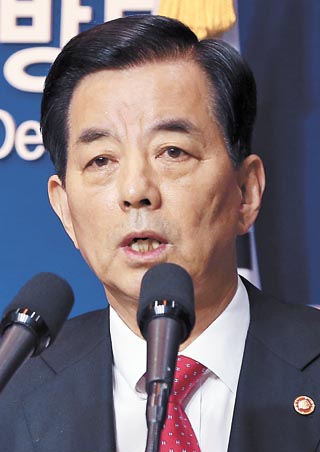 “[Deployment of the] Thaad system definitely needs to be seen in the perspective of national defense and security,” said Han on an evening news program of the MBC network Monday. “In terms of military standards, there is a limitation to our capabilities, so there is a military need for a thorough review of the [Thaad].”

This was the first time the defense chief directly addressed the need for a Thaad battery in South Korea, a hot potato issue that could strain relations with neighbors such as Beijing.

Han’s remark was a step beyond the Korean Defense Ministry’s basic position that there has been no formal discussion in Washington and Seoul on the issue.

The installing of a Thaad battery in Korea has been controversial, particularly because it comes with a radar system that can detect threats more than 1,000 kilometers (620 miles) away - far enough to reach China and Russia. Both countries complain it goes against their security interests.

Han also warned that North Korea’s deployment of a submarine-launched ballistic missile (SLBM) might happen in less than four years since it has completed underwater ejection testing.

In a national address on Jan. 13, President Park Geun-hye said a deployment of Thaad will be considered “based on our security and national interests and also by taking into account the North’s nuclear and missile threats.” This is viewed as her strongest remark on the issue to date.

However, Kim Min-seok, spokesman of the Ministry of National Defense, in a briefing Tuesday said that the ministry’s fundamental position on the issue of the U.S. Forces Korea’s placement of the Thaad “is to review it taking into consideration North Korea’s nuclear and missile threat and our security and national interest.”

Kim added that should the U.S. Department of Defense decide to dispatch a Thaad battery to the U.S. Forces Korea, and asks for cooperation and issues a formal request to the Korean government, “[the ministry] will then review it.”

He added that Minister Han’s words reflect that the “deployment of the U.S. Forces Korea’s Thaad will be helpful toward our security and defense,” as part of measures “to expand our ability to restrain and respond to North Korea’s continuously heightened nuclear and missile threat.”