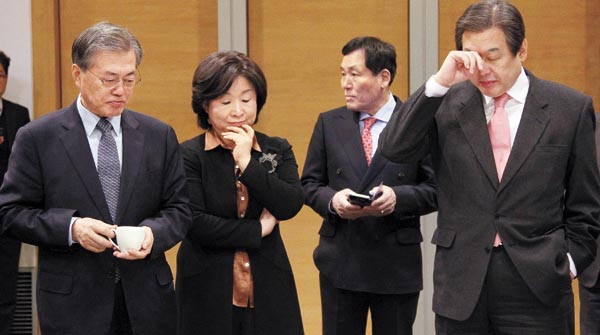 The leader of the ruling Saenuri Party stoked controversy Tuesday, levying remarks that indirectly blamed President Park Geun-hye for pushing for the passage in 2012 of the National Assembly Advancement Law, which he blamed for the current deadlock in the legislature.

“Most of lawmakers in our party opposed its passage but changed their stance at the insistence of the party’s former chairman,” Saenuri leader Kim Moo-sung said at an event hosted by the Korea Chamber of Commerce and Industry, in what was likely a reference to the president, who served as the interim leader of the ruling party at the time.

The bill was passed on May 2, 2012, in the last plenary session of the 18th National Assembly.

“The ruling and opposition parties already agreed on the [National Assembly Advancement] bill and promised the people,” Park said on April 25, 2012, during a press conference just two weeks earlier, when she urged lawmakers to pass the bill as soon as possible.

In the current Assembly, only 30 percent of all proposed bills have passed - the lowest level since 1948. The gridlock stems from the controversial National Assembly Advancement Law, which makes it impossible to pass contentious bills unless they are supported by three-fifths of lawmakers.

Kim, who voted against the bill in 2012, reportedly claimed to have suffered the most from the advancement bill despite expressing his opposition from the beginning.

After Kim took over as leader of Saenuri Party in July 2014, he struggled to compromise with the opposition party, which took advantage of the law when the ruling party pushed to pass major bills, which included revisions to the Public Officials Pension Act.

The deadlock in the National Assembly continued Tuesday.

The Minjoo Party of Korea rejected requests Tuesday for a meeting with the leaders of the ruling party and the opposition, furthering the likelihood that pending bills will continue to hang in limbo.

Leaders in the main opposition Minjoo Party announced they would not appear at the meeting, placing the blame on the Saenuri’s obstinacy.

Recent discord has revolved around the two parties’ failure to decide upon whether to first pass a revision to the electoral map with other major bills still pending.

Lee Jong-kul, the Minjoo Party floor leader, urged the Saenuri to adopt a revised draft of the new electoral map for the April general election by Friday. He added that it would be difficult to pass other bills if the ruling party did not abandon its stance to reach a deal on the election bill together with a bill regarding seconded workers.

While the leaders of the two parties have agreed to increase the number of elected seats by seven, to 253, thereby reducing the number of proportional seats to 47, both sides continue to remain at an impasse over the details of the proportional system.