Factories cut back on electricity use as economy struggles

Factories cut back on electricity use as economy struggles 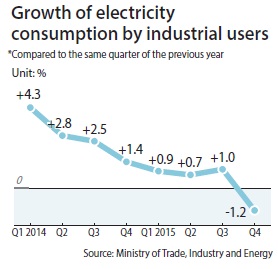 For the first time in six years, electricity consumption by industrial users fell in the fourth quarter of 2015 compared to the same quarter the previous year, according to a report released Wednesday by the Ministry of Trade, Industry and Energy.

The year-on-year decrease suggests Korean factories have been turning off their productions lines in response to the struggling economy.

The report on the falling use of electricity at factories came a day after the Bank of Korea (BOK) released disappointing news on the economy’s slow progress. While the economy grew 2.6 percent overall last year, the BOK report showed that it had decelerated sharply in the last three months, as growth slowed to 0.6 percent compared to the previous quarter. This was a sharp turnaround from the previous month, when the economy seemed to show signs of recovery with 1.3 percent growth, the sharpest quarterly increase in five years.

Total electricity consumption last year grew 1.3 percent to 483.7 billion kilowatt hours when compared to that of 2014. The increase, though, is relatively weak, suggesting the economy in recent years has been struggling. Since 2013, the annual growth rate has failed to break past 1 percent. This is a stark contrast to the mid-2000s when annual growth in electricity use was between 5 and 6 percent.

Total industrial consumption last year, on the other hand, only went up 0.4 percent. The ministry said the industrial growth rate was limited as consumption by the steel and electronics industries fell last year, while chemical and auto companies used more.

According to the ministry, overall electricity consumption was highest in January and lowest in October.

Meanwhile, state-run enterprises, including the Korea Electric Power Corporation (Kepco), will invest a total of 6.4 trillion won ($5.3 billion) this year in the energy industry to expand the market.

Kepco will generate funds by investing a total of 2 trillion won by 2017 in order to attract more private investment in the energy industry. The company will also spend 200 billion won in building 20 electric vehicle charging stations around the nation.

The ministry also said it will invest 400 billion won and cooperate with other government branches to build solar power generators in some 1,000 local schools.