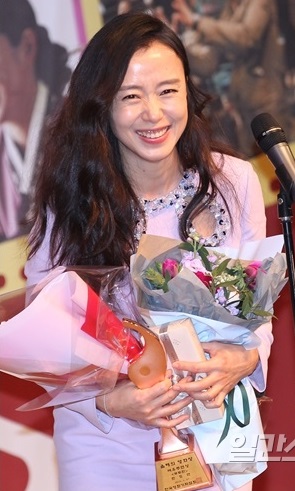 Actor Yoo Ah-in and actress Jeon Do-yeon (pictured) have received the Best Actor and Best Actress awards from an association of Korean film reporters on Wednesday.

Korea Film Reporters Association honors the best actors and films every year. Films that are released between Jan. 1 and Dec. 30 of the previous year are automatically nominated.

Yoo was honored for his role in the historical film “The Thorne,” while Jeon was chosen for her performance from the noir film “The Shameless.”

With “The Throne,” Yoo has nabbed two best actor awards including this one.

“The Throne” chronicles life of Crown Prince Sado (1735-62) and his tragic death of suffocation and starvation after being locked in a rice chest by his father, King Yeongjo (1694-1776).

“The Throne” also won the best film of the year, while Ryu Seung-wan, the director of “Veteran,” was also honored.

Newbie actor and actress awards went to Byun Yo-han of “Socialphobia” and Park So-dam of “The Priests.”