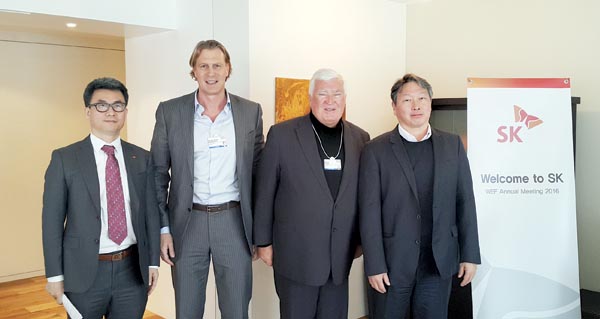 SK Group will steer its focus towards ‘new energy’ amid growing concern over climate change, the group said Wednesday.

In its efforts, SK will leverage the expertise the group has collected from its affiliates’ diverse range of business interests, which include energy, telecommunications, electric car batteries, retail, logistics and IT services.

The group has set up a team devoted to the emerging sector at the SUPEX Council, its highest decision-making body that oversees the business direction of the group. At the helm of the new team is CEO Yoo Jung-joon of SK E&S, an energy affiliate.

“The convergence between ICT and energy is taking shape in the new energy sector,” the company said in a statement, “Therefore, tech giants Google and Softbank as well as energy companies have entered the area.”

In operating the business, the country’s third largest conglomerate plans to seek partnerships with players both at home and abroad.

Chairman Chey Tae-won appears to be at the forefront of fostering potential partnerships, as the chairman and Yoo met energy industry heavyweights at the World Economic Forum held last week in Davos, Switzerland.

They discussed ways to cooperate in the energy and chemical sectors.

The term took center stage at the global forum, which ran from Jan. 20 to 23.

The forum said that two-thirds of all new energy supply will come from renewable sources over the next 30 years, raising the prospects of businesses related to alternative energy.

Google recently pumped up its investment in the sector, committing $300 million to support at least 25,000 rooftop power plants to boost renewable energy.

SK said that its new team will eventually develop into an official committee as soon as steps become more concrete.

The initial task of the team is setting mid-to-long term strategy and reporting the progress of new projects to the SUPEX Council.

The conglomerate has been looking for new growth engine as sales at key affiliates like SK Telecom have become stagnant.

“The team symbolizes SK’s commitment to new energy business,” said Yoo. “SK will develop the area as the next growth engine, which also goes hand in hand with the government’s initiative to boost renewable energy.”