Moon bows out of an ‘excrutiating’ position

Moon bows out of an ‘excrutiating’ position 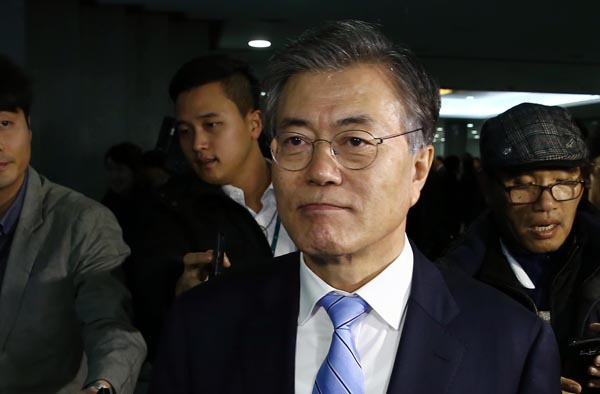 Opposition Minjoo Party Chairman Moon Jae-in resigned from his post Wednesday, putting an end to a 354-day reign marked by raw factional divisions and defections of lawmakers disgruntled with his leadership. With Moon’s resignation, he gave up a promise he made during a leadership race that he would carry the party through the April general election and bridge divisions among its members.

In what was his last supreme council meeting on Wednesday, Moon acknowledged he had failed to achieve unity during his term as chairman and daunting obstacles had faced him in his stewardship. “It is never an easy job to pursue change,” Moon said. “While it’s easy to talk about change, carrying it out was an excruciating task.”

“Many conflicts and scars have marked the party [during my leadership]. I am solely responsible for causing disappointment and concern to the people,” continued Moon, who also said he would campaign for the party in the general election with the rank and file.

With the resignation of Moon, an emergency committee run by the economist-turned-politician Kim Chong-in took charge of the party Wednesday afternoon.

Moon became just the latest leader forced to give up leadership of the fractured main opposition party.

“It requires a mature political environment and stability for an elected official to fulfill his or her term,” said Lee Jung-hee, professor of political science and diplomacy at Hankuk University of Foreign Studies. Lee noted that Moon’s early resignation was a reminder of how Korea expects elected officials to take responsibility for every election or event that goes awry.

Moon was elected party chairman on Feb. 8 on the promise that he would bring sweeping changes to a party engulfed in factional strife. It was his comeback after a defeat to the ruling Saenuri Party’s Park Geun-hye in the 2012 presidential election. In less than three months, party members began to demand his resignation in the aftermath of the party’s stunning defeat in April 29 by-elections. The party lost all four contested races.

Since the April election, the human rights lawyer-turned-politician has constantly been criticized by members outside the party’s main group, which is comprised of loyalists to former President Roh Moo-hyun.

While Moon tried to introduce “sweeping changes” with a reform committee run by party outsider Kim Sang-kon, disgruntlement among anti-leadership members only grew. They were particularly opposed to a proposal to allow non-party members to take part in party primaries.

Last month, former party co-chairmen Ahn Cheol-soo left the Minjoo to create his own party in open disdain of Moon. The number of lawmakers commanded by the Minjoo is down to 109 from the 128 the party won in the 2012 general election.

While the Minjoo faces an uphill battle in April, hopes rose slightly after Moon recruited some fresh faces including forensic psychologist Pyo Chang-won and Kim Byung-gi, former director of the personnel bureau of the National Intelligence Service.