North could be getting ready for missile launch

North could be getting ready for missile launch 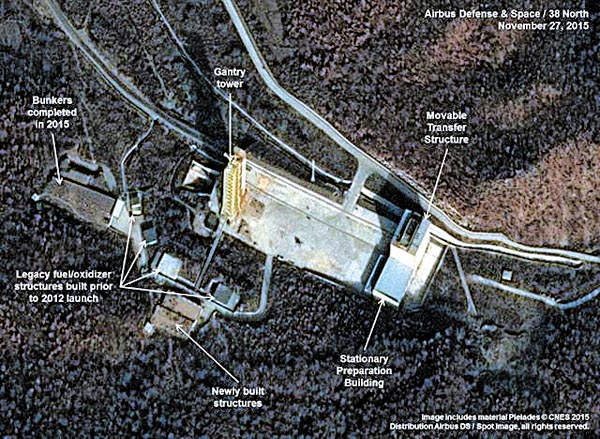 North Korea is preparing to launch a long-range missile at its northwestern launch site, reported a Japanese news agency on Wednesday, citing an unnamed government source who backed the claim with satellite imagery analyses.

Kyodo News Agency reported that the Communist nation was readying a ballistic missile launch from the Dongchang-ri launch site in North Pyongan Province, which the report said could come in a week at the earliest. United Nations Security Council resolutions prohibit North Korea from using ballistic missile technology.

The Kyodo report on a possible missile launch came less than a month after the North drew international condemnation for its fourth nuclear test on Jan. 6, which prompted calls for more stringent punishment of Pyongyang, which bragged about having tested a hydrogen bomb.

South Korea’s Ministry of National Defense neither confirmed nor denied the report on Thursday and said if the North did fire a long-range missile, it would be done “in an abrupt manner” without prior notice.

“We now conclude that there is a possibility the North could carry out military provocations in an abrupt manner,” said Kim Min-seok, a Defense Ministry spokesman, during a press briefing. He cited Pyongyang’s surprise nuclear test on Jan. 6, which was done without any advance warning, even to longtime ally China.

“We are closely watching for any signs of a long-range missile launch by North Korea,” he continued.

Kim said North Korea had yet to declare a no-sail zone, which means a missile launch could be imminent. He also noted that a launch pad in Dongchang-ri has been covered by a canvas.

According to military sources, personnel and vehicle movement at the Dongchang-ri launch site had been spotted in recent days. But the military has not determined that the North was about to fire a ballistic missile.

“South Korea and the U.S. probably have more information regarding the North Korean missile program,” one military source said. “We have been monitoring the Dongchang-ri launch site, but we don’t think a launch will take place within a week.”

North Korea last launched a long-range ballistic missile in December 2012, claiming it was to put a satellite in space, a claim the international community did not buy. The North also claimed it successfully fired a ballistic missile from a submarine underwater last year.

A Unification Ministry source said the launch of a missile would be in direct violation of the UN Security Council resolutions, and Seoul would act accordingly. Asked whether the joint industrial complex in Kaesong would be closed as a punitive measure, the official said the complex was not subject to such a measure.