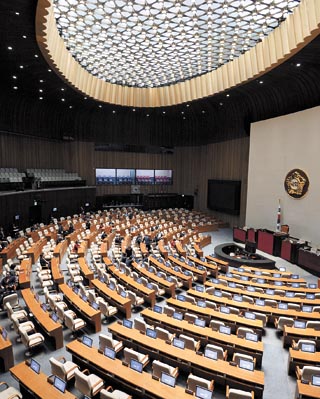 Despite bipartisan agreement to pass two contentious bills on Friday - including the so-called “One-Shot Act” to breathe life into the economy - the ruling and opposition parties were unable to narrow their differences and take the vote, delaying a plenary session of the National Assembly.

In a meeting between ruling and opposition party floor leaders, deputy floor leaders and chief policy-makers on Jan. 23, the two sides agreed to vote on the One-Shot Act and a bill on North Korean human rights on Friday.

After passing those two bills, the chairmen and floor leaders of the ruling Saenuri Party and the main opposition Minjoo Party were expected to hold talks over other deadlocked bills, particularly a package of four labor reform bills pushed by the government, and the redrawing of the nation’s electoral constituency map.

But the plenary session initially scheduled for 2 p.m. was pushed back to 4:30 p.m., then postponed indefinitely as of press time, mainly because of disagreement over when to deal with the electoral redistricting.

“Even if the plenary session is delayed, we have decided to settle the redistricting bill first, and then proceed with the bills agreed to be voted on,” Minjoo Party floor leader Lee Jong-kul said during a meeting with lawmakers on Friday.

That was in contrast to comments by Saenuri floor leader Won Yoo-chul: “Right after the One-Shot Act is passed in the plenary session, the ruling and opposition floor leaders will discuss the bill on electoral redistricting.”

The One-Shot Act, which was introduced to the National Assembly last July, aims to reduce legal procedures and provide tax cuts for businesses that are voluntarily sold off or purchased. It also covers mergers and acquisitions for companies and industry sectors in crisis.

The North Korea Human Rights Act, which calls for the government’s involvement in the improvement of North Korea’s human rights, includes the establishment of a bipartisan advisory committee on the issue under the Ministry of Unification.

It was submitted to the National Assembly in June 2012, but the opposition has generally been against any bill on Pyongyang’s human rights because it fears it could worsen inter-Korean relations.

Even after the Jan. 23 agreement, the Minjoo Party threatened to boycott the plenary session unless a consensus on a new electoral map was agreed upon.

The floor leaders from the ruling opposition parties agreed in a telephone conversation late Thursday to go ahead with holding a plenary session on Friday.

The Minjoo Party has also been requesting the ruling party to pass a bill on revising the Minimum Wage Act and a bill on the development of convergence technology.

However, the possibility of passing the North Korean human rights bill on Friday seemed low from the get-go.

Kim Jung-hoon, the Saenuri’s chief policy-maker and his Minjoo counterpart Rhee Mok-hee met earlier in the day at the National Assembly for last-minute talks over passing the North Korea human rights bill but could not agree on Article 2 of the draft legislation dealing with the state’s responsibilities.

The Minjoo Party was pushing for a clause that stipulates South Korea “together with efforts to promote North Korean human rights should push to improve inter-Korean relations and peace and stability on the Korean Peninsula.”

The Saenuri Party wanted to stick with the phrase: “The state needs to push for efforts to promote North Korean human rights, together with efforts in the direction of progressing inter-Korean relations and stabilizing peace on the Korean Peninsula.”

A meeting of the parliamentary Foreign Affairs and Unification Committee to decide on the human rights bill was unable to convene. Lee, the Minjoo floor leader, said, “The difference may seem slight but there is a heavy difference between the clauses in regard to the right to survival and peace, so we could not come to an agreement with the ruling party.”

He added that the Saenuri Party said that it could not agree on an electoral map bill if a group of seven bills, including its labor reform legislation, is not passed. “We have come to an agreement on district and proportional seats,” Saenuri floor leader Won said. “However, we have held difficult negotiations on how to divide cities and provinces. … I am not sure why floor leader Lee is not upholding our Jan. 23 agreement.”

But the Minjoo Party declared later in the evening that it boycotts a plenary session if only the One-Shot Act is passed.

Ahn Cheol-soo, who defected from the main opposition party to form his own political party, expressed support for both bills being passed earlier that day. “If possible, a plenary session should be held and the bills that have been agreed upon should be passed,” the software tycoon-turned-politician told reporters at the National Assembly earlier that day.

It added that if the bill was passed in the South, it would “incite a confrontational system between the same people and maximize distrust and confrontation between the North and the South, and will clearly become a big impediment toward the path of peaceful unification.”