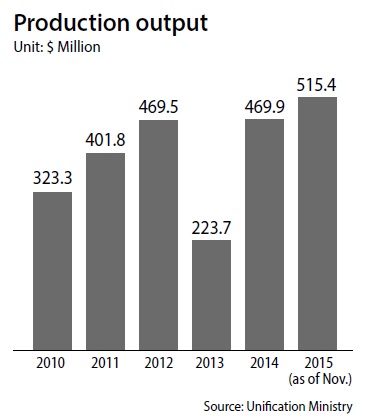 Production output at the Kaesong Industrial Complex surpassed $500 million last year for the first time since its opening in 2004, the Unification Ministry said Sunday.

For the first 11 months of last year, 124 South Korean companies operating across the border in the city of Kaesong produced $515.4 million worth of goods, posting more than a 20 percent increase from the previous year.

The highest output from the joint manufacturing facility came at a time when South Korea has been scrambling for ways to punish North Korea in collaboration with its allies, including the United States, for its latest nuclear test Jan. 6 via the imposition of more economic sanctions.

Given the average monthly production value at the complex is around $50 million, the total production output for last year is expected to reach around $565 million.

As of November, the firms running factories in Kaesong employed the total of 54,763 North Korean workers. Operations at the joint complex continued even when inter-Korean tensions soared last summer in the aftermath of a land mine explosion inside the demilitarized zone on Aug. 4, which maimed two South Korean soldiers and prompted the South Korean military to resume loudspeaker broadcasts at the border.

The joint complex kept running even when Pyongyang declared a quasi-state of war and demanded an immediate halt to the loudspeaker campaign.

The Kaesong complex is the last vestige of inter-Korean economic cooperation as all other projects, such as the Mount Kumgang tour program, have been suspended since 2010, when Seoul imposed economic sanctions to punish Pyongyang for its torpedoing of the Cheonan warship, which left 46 sailors dead. Under the so-called May 24 sanctions, all inter-Korea economic activities except Kaesong have ground to a halt.

The Kaesong joint complex faced a crisis in 2013 when North Korea unilaterally withdrew all of its workers from the factories in protest of Seoul’s policy toward Pyongyang, forcing all work at the complex to stop. It took four months for the complex to resume operations. As a result, the production output that year plummeted to $223.7 million from $469.5 million in 2012.

The Kaesong complex was created as a direct outcome of the landmark first summit between leaders of the two Koreas in June 2000 in Pyongyang, which also paved the way for holding regular reunions of families separated by the 1950-53 Korean War.