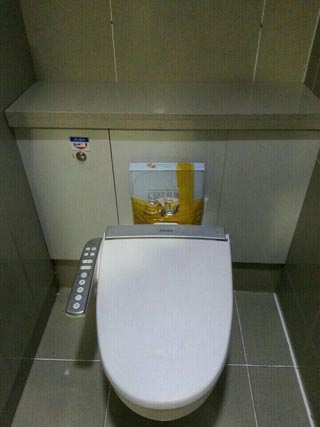 A box that was suspected to contain explosives sits atop a toilet in a men’s restroom Friday at Incheon International Airport. [INCHEON INTERNATIONAL AIRPORT]

Bomb-disposal technicians were dispatched Friday to a men’s restroom at Incheon International Airport after a box suspected of containing an explosive was discovered on top of a toilet in one of the stalls.

Police confirmed upon retrieving the box and dismantling it that it wasn’t an explosive, but added Saturday that a note was found folded in half inside.

The note, printed on A4 size paper and written in grammatically incorrect Arabic, roughly read: “This is the last warning. God will punish you.”

While the message was suspected here of being related to the Islamic State (ISIS), local authorities downplayed the possibility, saying that the grammar was highly incorrect and that the extremist group usually quotes verses from the Quran that begin with “If Allah wills.”

The perpetrator has yet to be found. Police believe the act was meant to be a copycat version of an ISIS terrorism act.

Airport officials said they received a call at 4:30 p.m. Friday from a person who claimed to have found a “suspicious object” in a men’s restroom on the airport’s first floor.

The paper box, which seemed to have originally contained traditional Japanese confectionery, had taped on the outside a butane canister, a water bottle and a gas cylinder, all of which were at least partially full.

Authorities later said that inside the box were food scraps such as broccoli, cabbage and a banana peel, as well as three guitar strings, four batteries and four pieces of electric wire, among other things.

While a suspect remained unidentified Sunday, police said they retrieved 19 fingerprints from near the scene and are investigating whether they are related to the suspicious box. Police did not verify whether the fingerprints were all from the same person, saying more time was needed for a thorough analysis.

Whether any fingerprints were found on the box is unknown.

A team of 50 Incheon police officers has been assembled to track down the suspect.

Police are reviewing the footage from some 90 CCTVs near the restroom to look for further clues, but said over the weekend that nothing noteworthy has yet been discovered because too many people had entered that particular restroom around 4 p.m. Friday.

No surveillance cameras are installed inside the airport’s restrooms due to privacy policies.