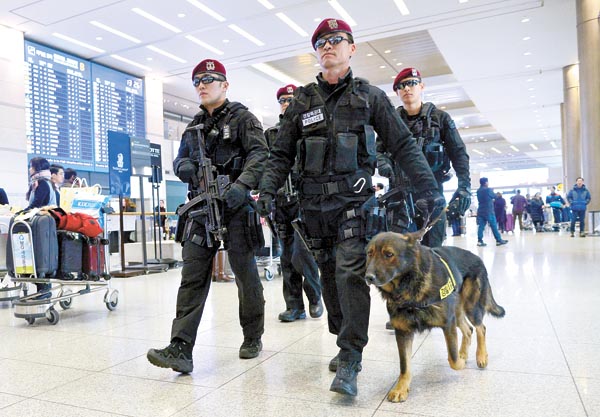 A special weapons and tactics team of the Incheon Metropolitan Police Agency and a sniffer dog patrol Incheon International Airport on Sunday, after a series of recent security breaches. A box suspected of containing an explosive was discovered in an airport bathroom on Friday and two cases of illegal entries by foreign transit travelers were reported in the past two weeks. [NEWSIS]

The apparent evasion of airport security by what was later determined to be a 25-year-old Vietnamese man came just eight days after a Chinese husband and wife team forced their way out of the airport Jan. 21 by breaking open a locked door with a screwdriver.

The two Chinese were arrested Jan. 25 in Cheonan, South Chungcheong, some 90 kilometers (56 miles) south of Seoul, at a public market and are now detained on charges of violating Korea’s Immigration Control Law.

Local authorities said they claimed to have fled the airport in order to find work in Korea and that a broker, a Chinese illegal immigrant, had helped them.

The alleged broker has not yet been found.

While the whereabouts of the Vietnamese man remained unknown Sunday, police said CCTV footage retrieved from the airport showed that the suspect forced open a door at an unmanned automatic immigration checkpoint on the airport’s second floor and managed to escape without any impediment. There were no security guards in the area.

At the airport’s 72 unmanned immigration checkpoints, a gate opens when the system verifies a user’s passport and certain biometrics, including a facial scan and fingerprints.

According to the airport, the suspect arrived at 5:05 a.m. Friday from the Vietnamese capital of Hanoi on a Korean Air flight and was supposed to depart on a flight to Japan’s Narita International Airport at 10:10 a.m.

Airport officials discovered he was missing when he hadn’t boarded his next flight and alerted the Korea Immigration Service about 25 minutes later at 10:35 a.m.

Referencing CCTV footage from the airport, authorities later determined the suspect had escaped the airport at around 7:30 a.m.

A bag thought to have been brought from Hanoi by the suspect was later found inside the airplane, and authorities Sunday were searching it for further clues. While “several contacts” have been found inside, police are checking whether a local broker was involved as with the earlier case involving the Chinese husband and wife team.

Korean Prime Minister Hwang Kyo-ahn visited the airport Saturday for a field inspection and harshly condemned airport officials for the underlying loopholes in security, saying the latest cases had “threatened [the airport’s] reputation and competitive edge,” ultimately leading to a “crisis of national trust.”

Warning that the airport “will lose everything” if it fails to improve security measures, Hwang pushed authorities to devise expansive backup measures, and furthered that they will especially have to watch out during the upcoming Lunar New Year holidays, when a massive flood of travelers is expected to pass through the airport.

As airport officials struggle to explain why their security systems failed, a look into the 72 unmanned immigration checkpoints installed at Incheon International Airport found that a lack of human resources overseeing the devices may have been one reason why the Vietnamese man was able to break through so easily.

Sixteen security guards from a private company contracted by the Korea Immigration Service are in charge of managing the devices spread out in 12 different areas within the airport, but some critics claim they are critically lacking the kind of professionalism required for such a task.

A source from the Ministry of Justice, which oversees the Korea Immigration Service, claimed that it previously requested the Ministry of Strategy and Finance to upgrade the number of security guards from the current 16 to 60, but was denied due to a lack of budget.

Lee Ju-rak, a security administration professor at Kyonggi University in Suwon, Gyeonggi, lamented that their capabilities are inadequate.

“Half of the entire body of security guards [working at local airports] has less than two years of experience,” said Lee, adding that they “normally go off to find other jobs before gaining experience in their fields.”