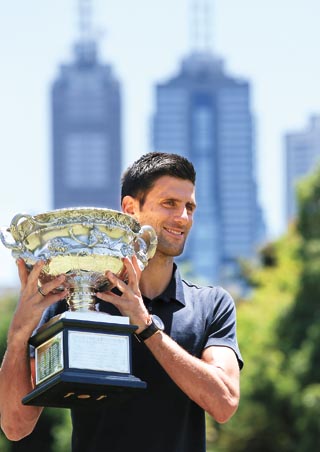 Novak Djokovic with his trophy after beating Andy Murray to win his sixth Australian Open. Djokovic is now setting his sights on the French Open, the title he describes as “the one I never won”, although he feels he is getting closer each year. [AP/NEWSIS]

MELBOURNE, Australia - Novak Djokovic has a new goal for the year. He calls it the Djoker Slam.

The No. 1-ranked player has one thing missing from his fast-growing collection of 11 Grand Slam trophies.

“The French Open. It’s the one I never won,” Djokovic said early Monday, after winning his record sixth Australian Open, but already casting an eye toward Paris. “I’ll try to put myself in a position to get that trophy.”

Djokovic’s relentless desire for tennis perfection has pushed him to a brilliant level, one that was too high for Andy Murray who lost Sunday’s final 6-1, 7-5, 7-6 (3). The straight-sets win highlighted Djokovic’s dominance and Murray’s shortcomings: the No. 2-ranked Murray has now played five finals in Melbourne and lost them all - including four to Djokovic.

It also stamped Djokovic’s imprint on the tournament, tying him with Roy Emerson for the most singles titles in the event’s long history. Emerson played in the 1960s and won his Australian titles in the amateur era.

Djokovic’s strong start to the season comes after a year that has been described as one of the finest in tennis history. He finished 2015 at No. 1 for the fourth time in five years. He won the Australian Open, Wimbledon and the U.S. Open.

He reached the final at the French Open, but lost to Stan Wawrinka. It was his third runner-up trophy at Roland Garros.

“Each year when I go back I feel like I’m a step closer,” Djokovic said during a TV interview after the final.

He was asked, if he does win the French Open and manages to capture four consecutive major championships, would he give it a name? On the women’s side, Serena Williams has done it before and her feat was called the “Serena Slam.”

“Djoker Slam. Not bad, I like that one,” said the 28-year-old Serbian, referring to his nickname, the Djoker.

“No doubt that I’m playing the best tennis of my life in the last 15 months,” Djokovic said. “The results are showing that. I’m just trying to keep it up.”

With his 11th major title, Djokovic is steadily gaining on Rafael Nadal’s 14 and Roger Federer’s record 17.

The so-called Big Four of men’s tennis - Federer, Nadal, Murray and Djokovic - has been looking more lopsided with Djokovic’s winning record. He now leads the pack with head-to-head wins over them all - Federer (23-22), Murray (22-9), Nadal (24-23).

In Melbourne, Djokovic beat Federer in straight sets in the semifinals before moving on to Murray. Nadal lost in the first-round, raising more questions about whether his Grand Slam winning days had passed. Last year was the first season since 2004 that Nadal did not win a major title.

Throughout the tournament, Djokovic was repeatedly asked about the increasingly wide gulf between him at No. 1 and the rest of the players. At his final news conference, Djokovic answered the question with a metaphor.

The wolf that is running up the hill is much hungrier than the wolf standing at the top of the hill, Djokovic said.

“I believe that all the guys that are out there fighting each week to get to No. 1 are very hungry to get to No. 1,” he said. “I want to enjoy, and I will, but it’s not going to go for more than a few days. After that, I’m already thinking about how I can continue playing well through the rest of the season at each tournament.”

Returning to the metaphor, how hungry is the wolf for Paris, he was asked.

“Very hungry,” Djokovic smiled. “But the wolf needs to eat a lot of different meals to get to Paris. Paris is a dessert.” AP