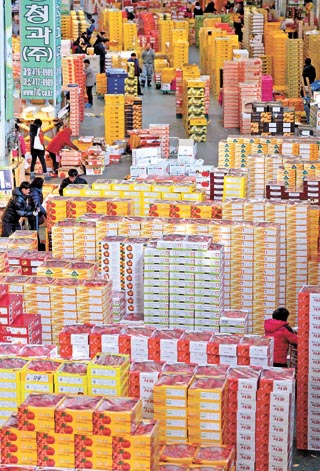 As the Lunar New Year, one of the two biggest celebrated traditional holidays in Korea, is now less than a week away, boxes of fruit (including the plump, juicy Korean pears usually placed on altars for ancestral rites) pile up at the Noeun Agricultural and Marine Product Market in Daejeon on Monday. Despite gloomy economic indicators, the holiday - during which some have taken as many as nine days off - is bringing about some positive spending. [NEWSIS]