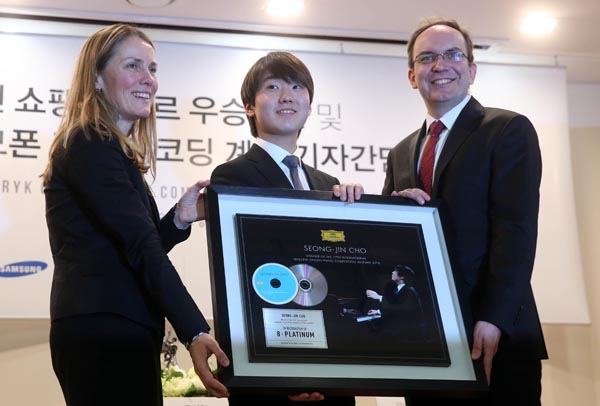 Today, Korean fans of star pianist Cho Seong-jin, 21, have a chance to experience live the excitement of when he became the first Korean to win the prestigious International Chopin Piano Competition in Warsaw last October.

Alongside five other winners of the competition, and under the baton of Jacek Kaspszyk, Cho has been touring Europe to perform gala concerts, and he arrived in Korea on Monday for the final stop in Seoul.

Returning home for the first time since winning the competition, Cho appeared in front of local media at the Seoul Arts Center right after landing at Incheon International Airport yesterday afternoon. The concerts will be held at the center today at 2 p.m. and 8 p.m.

“I’m back in Korea for the first time in a year,” Cho said. “My heart is fluttering, and I’m so happy to be back, yet I’m so nervous for the gala concerts tomorrow as it will be the first in my motherland.”

On winning the competition, Cho said, “I didn’t really like participating in piano competitions because they are so stressful. But my goal is to become a concert pianist who is active in Europe and in America, and winning competitions can be a good foothold for musicians with such a goal.”

Artur Szklener, the director of the Chopin Institute who was at the press conference with Cho, also pointed out that last year’s competition was unlike previous ones.

“As people may know, the Chopin competition is the most important in Poland, and it has a long history since it was established in the 1920s,” he said. “But the impact that the Chopin Competition had on the musical world and also on the general public in Poland never happened in this scale before. … For instance, one article that was published on Facebook was read by almost a million people worldwide. That’s something that’s impressive.”

Upon his arrival, Cho also signed an exclusive contract with Deutsche Grammophon, a German classical music label. They’ll record a first album in April in Berlin. The album will consist of Chopin ballads and feature Korean maestro Chung Myung-whun, who recently left the Seoul Philharmonic Orchestra.

“I’ve been working with maestro Chung since 2009, and I have great respect for him as a musician,” Cho said. “I’m looking forward to the recording I’ll do in April.”

In the meantime, Cho signed a five-year contract with Deutsche Grammophon and plans to release five albums.

“I haven’t thought of what my second album is going to be, but it will be something other than Chopin,” the pianist said.

Cho has become a star overnight. His name was unknown by most Koreans before, but today, musicologists like Szklener praise Cho’s ability to interpret Chopin.

Cho wasn’t a prodigy, and his parents aren’t musicians; he just liked classical music since he was young. In fact, he played both the piano and violin as a young boy.