In shift, Minjoo says it is pro-economic growth

In shift, Minjoo says it is pro-economic growth 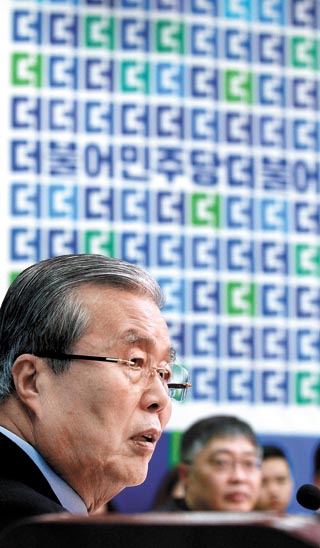 Kim Chong-in, the interim leader of the main opposition Minjoo Party of Korea, attends a press conference in the National Assembly on Monday, where the party announced its economic policy pledges. [CHO MUN-GYU]

The largest liberal opposition party has chosen economic growth as its new vision for the April general election, promising 720,000 new jobs and massive public housing projects for the younger generation, in a road map announced Monday.

Leaders of the Minjoo Party of Korea held a press conference at the National Assembly and announced their economic policy vision, titled “Grow Together.” Kim Chong-in, the interim head of the party, said the vision will redefine the public’s perception of the liberal opposition party.

“Some people disparage the opposition party as if we are only interested in [wealth] distribution and indifferent to growth,” Kim said. “Such people don’t have a proper understanding of economic growth. No one has said distribution is possible without growth. The idea of inclusive growth was presented because we can no longer continue the strategy of growth led by certain conglomerates.”

And yet, the “Grow Together” vision is a clear shift from the liberal opposition party’s previous economic pledges focused on distribution. In the 2012 general election, the party promised free day care, free school lunches and de facto free medical care. A pledge to cut college tuition in half was also made.

Kim said the new vision is about harmonizing distribution and growth.

“Until now, we were going after economic growth like that of Japan, Germany and the United States, but we must change our strategy to become a leader in new sectors such as aviation and aerospace. Of course, economic democracy will be the basis of this strategy to build a just society.

“If the Minjoo Party can push forward economic policies based on the ‘Grow Together’ vision, I believe a framework for inclusive growth through economic democracy will be established,” Kim said.

Other Minjoo leaders also stressed that they will make specific election pledges based on the vision.

“We will treat it as a platform for our party,” said Rep. Lee Mok-hee, chief policy maker of the Minjoo Party.

When the 75-year-old economist joined the Minjoo Party last month, expectations were high that his “economic democracy” philosophy would be reflected in the party’s campaign for the April general election. Kim was the architect of President Park Geun-hye’s “economic democratization” pledges in the 2012 race. After Park took office, Kim parted bitterly with her, saying that she failed to follow through on her pledges of economic democratization, job creation and welfare.

According to the vision announced Monday, the Minjoo Party promised jobs and housing to the nation’s youth. It promised to create 720,000 jobs, including 350,000 in the public sector.

The party said 170,000 public servant positions and 130,000 jobs at public institutions will be offered. Another 40,000 can be created in the renewable energy and sustainable growth sectors, it said.

Some 370,000 jobs in the private sector were also promised through a reduction of work hours and assigning quotas to companies to hire youth.

The party also promised to provide 50,000 public housing units by introducing a share-house system. The National Pension Fund’s 10 trillion won ($8.3 billion) in resources would be used for the program, the Minjoo Party said.

According to the plan, 150,000 young people can benefit from the housing projects.

The party also promised to increase the minimum wage and introduce measures to resolve inequality between salaried and contract workers. The same treatment and wage will be promised for the same job, even if the company hires a contract worker for the position, the party said.

It also presented plans to make large investments in the aviation, aerospace and pharmaceutical industries.