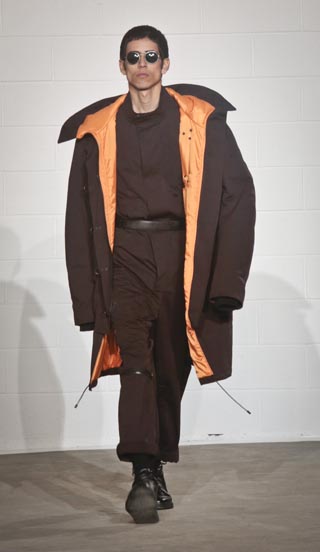 NEW YORK - The best seats in the house Tuesday for the men’s runway show by Public School weren’t seats at all. And they weren’t in the house.

Maxwell Osborne and Dao-Yi Chow set up a sidewalk strut for their models to the delight of waiting design students and other fans just outside the doors of Milk Studios on the sunny second day of New York Fashion Week: Men’s. The standers got the first look before models meandered back inside to a packed crowd of industry insiders.

As young design students in New York, did Osborne and Chow hope for the same?

“We’re still young design students,’’ Chow smiled. “I don’t think that there really was that many opportunities for us to sort of have access, which is why we wanted to be able to do this.’’

February is a huge month for the duo. They’re showing their women’s wear collection at fashion week following men’s week, and they’re putting out their second collection as creative directors for DKNY following Donna Karan’s departure.

For the men Tuesday, there were hats - beautiful, wide-brimmed hats in beige and black with circles of black fringe around brim tops.

“It’s something we’ve always been known to do, and it’s an elevated part of it every season,’’ Osborne said. “The concept of the season is the loner and, funny enough, ‘The Man Who Fell to Earth,’ the David Bowie movie, even prior to him passing. It’s based on this loner and this outsider that we always feel like we are, today, in our lives.’’

Some looks included triangle prints akin to the symbol for water, in homage to the search for water by Bowie’s loner character in the film.

“His impact on fashion goes without saying,’’ Chow said of Bowie, who died Jan. 10 at age 69 after battling cancer.

Bowie likely would have been pleased with Public School’s quilted camo jumpsuits worn with wide belts and its skinny pants hemmed above the ankle. Other pants came in nylon, including green joggers. The two designers put out some delicate tweed in long coats and short jackets.

John Varvatos, meanwhile, had some freaky fun later Tuesday, posing the question “Rock is Dead?’’ as the theme of a multimedia menswear show featuring live models in animal masks as old-school rock blared in a narrow, smoky downtown space.

The idea, he said, is to celebrate “doing something different and walking to your own beat.’’

Varvatos has been inspired by the rock scene for decades, opening a retail store inside the closed legendary club CBGB on Bowery. He’s still putting out luxury fashion but wanted to toy with disillusionment in a theatrical show that, in his words, asks: “Where are the rebels today? Is it just Miley Cyrus? Are we going to put up with the clowns that are running for president? Who’s stepping up? Who’s letting their voice be heard?’’