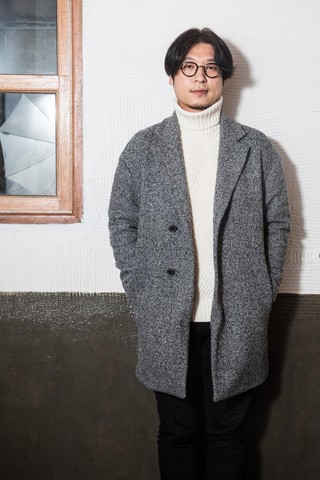 In a staid industry like Korea’s literary scene, the arrival of Axt certainly shook things up.

Without carrying any advertisements or critiques - a common feature of all literary magazines - this newbie bimonthly publication managed to sell 10,000 copies of its first issue last July. It lured in readers by differentiating itself with its sophisticated cover design and in-depth interviews with influential figures in the business.

The second and third issue also sold more than 7,000 copies each, a laudable achievement in an industry where even well-known publications usually only sell an average of 2,000 copies per month.

At the center of this phenomenon stands the ambitious editor-in-chief Paik Dahuim, who says he wants to publish a magazine “for novelists, their readers and eventually the novel itself.” 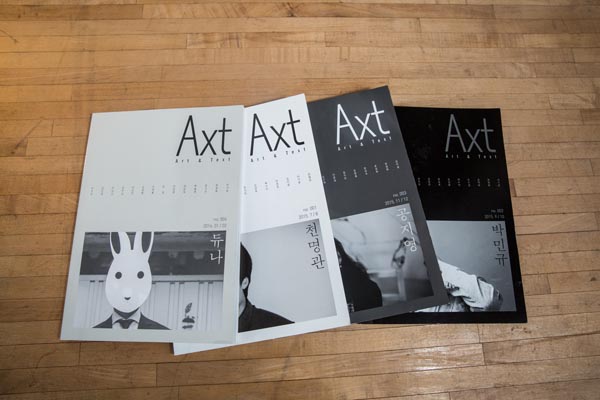 Axt draws in readers with its sophisticated cover design and in-depth interviews. [STUDIO 706]

In a recent interview with the JoongAng Ilbo, Paik, 37, talked about what he wants to achieve in Korea’s literary scene with Axt.

Here are the highlights.

Q. How do you feel about the attention given to Axt at a time when novels themselves are being neglected by readers?

A. I think we caught people’s eye in terms of design. Also, while existing literary magazines emphasize pointing out current issues going on in the local literary scene, we boldly went ahead without including critiques, but solely focused on novels.

What was the process of publishing this magazine?

Our mother company is EunHaengNaMu Publishing and its CEO Joo Yeon-sun suggested I make a comprehensive literary magazine that encompasses all genres from poetry to critiques. But I had a different idea because publishing another run-of-the-mill literary magazine would best end up taking over the No. 1 spot without any breakthrough. Instead, I suggested making something that would appeal more to younger readers and novelists. Along the way, novelists Paik Gahuim [Paik Dahuim’s brother], Jeong Yong-joon and Bae Suah participated as editors.

The magazine is centered on novels. The editors are novelists and the content includes a lot of novels and book reviews. Why is that so?

Novels can’t enhance quality of life or provide a way to accumulate wealth. Nonetheless, this seemingly meaningless task has its own meaning. I hoped people would become curious about it.

Such deliberation is reflected in the selection of interviewees for the four issues of Axt. The first was Cheon Myeong-kwan, followed by Park Min-kyu, Gong Ji-young and Djuna, all of whom are highly recognized novelists even to those not interested in literature. How did you come up with this lineup?

I wanted readers who are generally interested in culture, but not so much in literature, to come and see what our magazine had to offer. That is how the infrastructure of literary scene can become more solid. They would say, “I have heard of these people, but who are they exactly?” and after reading the magazine, they would get a sense of what these people were doing and think it is fun.

Why do you put much effort into running interviews?

Frankly speaking, people don’t know that many novelists. So the basic objective of these interviews is introducing them (laughs). And the second reason is to ask them about something other than writing novels. The interview becomes more natural because we are asking questions from a novelist’s perspective, instead of a journalist or reviewer. If you look closely, we do not talk much about novels. We ask them about their general interests, their political beliefs and more.

There are many reviews of novels in the magazine, but they are not necessarily new releases or domestic ones. What is the reason for this?

Your magazine also carries short stories and serial novels. Do you request the writers to reflect the color of your magazine as well?

We wouldn’t do that. Every writer has their own pace of producing a new piece of writing. We wouldn’t dare sway their work according to our medium’s color.

The cover design certainly did its job in drawing in readers. Who is responsible for this task?

Me and my friend, designer Lee Seung-wook, are entirely responsible for it. We just played around with it (laughs). Personally, I like something minimal and am attracted to the beauty of empty space. In this style of design, readers can focus more on the words, too.

Why did you decide to forgo running advertisements?

I insisted on it because I thought ads would violate with the overall design and the magazine’s identity. It was a bold move and it took a while to persuade the CEO as well. We are still in discussions about it, in fact.

For awhile at least. Making an easy-to-approach magazine was our sole objective. Our current goal is to sell 10,000 copies of each issue.

We are living in an era where novels are no longer considered an attractive medium for selling stories. Meanwhile, demand for interesting stories are continuously rising as shown in the film and drama industries. What is your main concern in working in the print medium?

In a sense, I envy the film industry because it is entirely up to the market to decide what succeeds or not. In the meantime, the quality of the content doesn’t decrease either. I think it is the road that the novels have to follow in the future.

You studied literature and photography. It is not hard to find your name credited in many of the profile photos of Korea’s famous novelists. What does publishing a magazine mean to you?

Publishing and art have an inexplicable relationship. You have to have a deep interest in liberal arts as well as have artistic sense. Making a magazine is challenging every time. But I feel joy in producing a finished item.