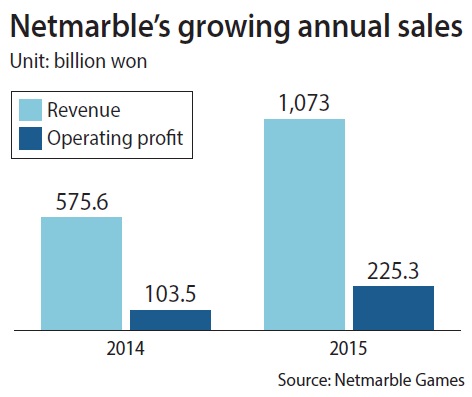 Buoyed by significant sales growth in recent years, mobile game publisher Netmarble Games plans to go public in a move that could fetch up to 7 trillion won ($5.8 billion).

The company held a closed-door meeting for potential underwriters in the financial circle on Thursday and is scheduled to hold a press briefing regarding its plans for an initial public offering (IPO) on Feb. 18.

“We will disclose the IPO plan, as well as new games, business strategies and growth trends during the event,” a Netmarble representative said.

The representative declined to comment on how it would use the proceeds from the IPO or give a specific timeline, but confirmed that Netmarble has sent out a request for a proposal to go public.

Netmarble is the top player in the mobile game industry in Korea, with games such as Everyone’s Marble and Taming the Monster, while NCSOFT has been slow to introduce mobile games.

When NCSOFT bought a 9.8 percent stake in Netmarble last year, the company was said to be valued at around 3.8 trillion won.

The combination of impressive revenue growth and the hot prospect of new games will push the value of the company higher than last year.

Some 20 new games are planned to hit the market this year.

The company’s existing lineup, which includes Marvel Future Fight, Raven and Idea, have continued to be popular.

In search of new revenue sources, Netmarble is focused on expanding outside of Korea.

The developer announced a global expansion plan last year as Bang Jun-hyuk, founder and senior adviser of Netmarble, declared that “the company has set its sights abroad.”

Bang also added that the company will be looking for mergers and acquisitions to bolster its presence overseas.

Global sales accounted for 28 percent of the company’s total last year and have continued to increase.

In the fourth quarter alone, global sales made up 40 percent of the company’s total.

Netmarble’s top shareholder is its founder, Bang Jun-hyuk, with 32.37 percent, followed by CJ E&M with a 31.4 percent stake. Chinese entertainment giant Tencent is the third-largest stakeholder, at 25.25 percent.