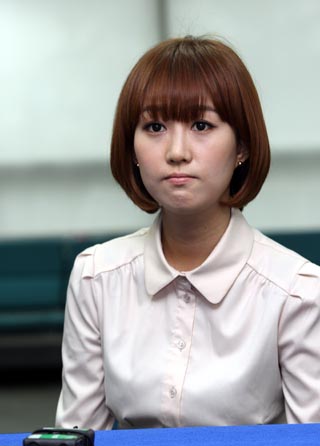 Singer Jang Yun-jeong has won a legal battle against her younger brother.
The Seoul High Court rejected an appeal lodged by Jang’s brother on Friday and ordered the brother repay the 320 million won ($270,000) he borrowed from his star sister.
The 36-year-old singer filed a lawsuit against her brother in March 2014 asking him to pay back the money he took from her.
But the brother claimed he already paid back all the money to the singer and that some of the money he had was not his sister’s but his mother’s.
Jang also won a similar lawsuit involving her mother years ago.
Jang has been embroiled in a series of legal battles with her mother and younger brother since 2014.
The singer told a local TV talk show that she found that her mother and brother had used up all of her money, which was about 8 billion won, without her consent.
Since then, Jang’s mother and brother began to criticize the singer by appearing on cable TV shows and doing interviews with the local media.
Jang, 35, debuted in the music scene in 1999. After spending many years as an obscure singer, she soared to stardom with the song “Oh My Goodness” in 2004.
She was the first young singer who tried her hand at trot, an old form of Korean pop. Singers in their 50s, 60s and 70s usually perform this type of music for audiences of a similar age, but Jang brought fresh talent to the genre with “Oh My Goodness.” By Sung So-young