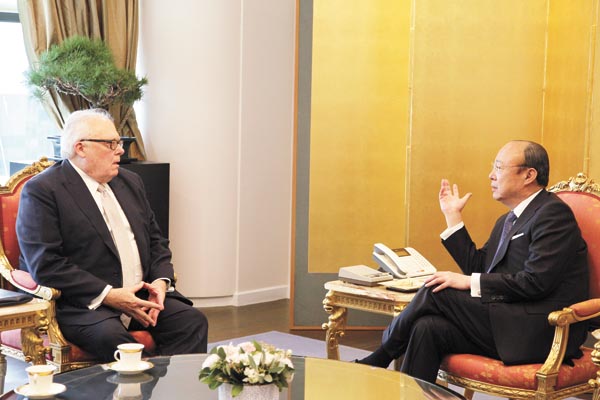 According to the group on Friday, Kim and Feulner, who is currently running the foundation’s Asian Studies Center, also discussed the company’s overseas projects, as well as the construction and solar power business.

Since 2012, Hanwha has signed contracts to design and build Bismayah New City on 18.3 million square meters (4,448 acres). The city, which is slated to be completed in 2019, will be similar in size to the Bundang District of Seongnam, Gyeonggi, or six times the size of Yeouido, western Seoul.

The initial contract Hanwha gained in 2012 for the Bismayah project was worth $8 billion. With the additional order last year, the leading builder has accumulated a $10 billion deal.

The new Iraqi city is to have eight blocks. Construction on the first block, which will accommodate 4,320 households, is currently under way. Nearly 550,000 workers from more than 100 Korean subcontractors are working at the site.

As part of the group’s business expansion overseas, Kim has been pursuing opinions from thought leaders and think tanks such as the Heritage Foundation.

Kim met Feulner in 2001 when he established the Korea-U.S. Exchange Council in 2001 along with other U.S. politicians, including former Secretary of State Henry Kissinger and Richard Walker, former U.S. ambassador to Seoul.

In 2011, Kim and Feulner met at the Plaza Hotel in Seoul to discuss building a system that can strengthen economic cooperation between the two countries. Feulner also visited Kim’s house in Gahoe-dong in February 2012.

The Heritage Foundation was established in 1973 as a think tank to develop policies in politics, economics, foreign affairs and national defense, and Feulner is recognized as one of few people who can influence the U.S. political circle. In 2011, the foundation named its conference center on the second floor of its Heritage Building in Washington, D.C., the Kim Seung Youn Conference Center.

Other than construction, Hanwha has recently expanded its business into fintech, or finance-related technology businesses.

The company signed a deal with Chinese company Dianrong Soul Htite to establish a joint venture on Thursday. The two will open a joint venture in Singapore within the month to start a loan business in August or September.