Chinese funds are pouring in to Korea’s cultural industry. Film distribution firm NEW, which released the 2015 film “Northern Limit Line,” left, has a Chinese company as its second-largest shareholder, while Chorokbaem Media, known for the KBS drama “The Producers,” middle, and Redrover, which made the animated movie “The Nut Job,” right, have Chinese companies as their largest shareholders.

The massive influx of Chinese funds into the Korean cultural industry continues to go strong this year. In fact, the volume of Chinese money is so large that Chinese companies are on the verge of becoming the largest shareholders of many local content-creation firms.

Chinese Internet company Sohu, which invested in the hit KBS drama “The Producers” (2015) starring Kim Soo-hyun, is currently the second-largest shareholder of Kim’s agency, Keyeast Entertainment. It invested 15 billion won ($12.5 million) in 2014 through a subsidiary and now owns 6.4 percent of the company’s shares.

Another Chinese firm is the second-largest shareholder of film distributor NEW, well-known for box-office hits like “The Attorney” (2013) and “Northern Limit Line” (2015). Zhejiang Huace Film & TV invested 23.5 billion won in 2014 and owns around 13 percent of shares.

Chinese companies are already the largest shareholders of the Korean-Chinese DMG Group, which owns about 25 percent of Chorokbaem Media - famous for producing “The Producers,” “Oh My Ghostess” (2015), “All In” (2003) and “The Slave Hunters” (2010). And Suning Universal Media owns around 20 percent of shares of Redrover, which made animated movie “The Nut Job,” released in 2014. 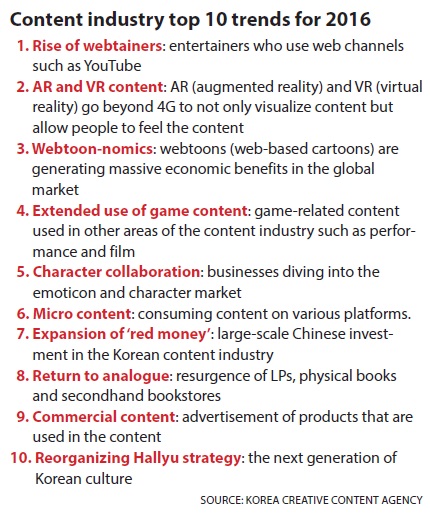 Signal Entertainment Group, which represents actresses Lee Mi-yeon and Kim Hyun-joo and produces drama series, including last year’s “Awl” on JTBC, will soon have a Chinese company as its largest shareholder. The Korean company sold 21.4 billion won worth of shares to Spearhead Integrated Marketing Communication, according to an official filing last month.

Dexter Studios, which provided special effects for the 2013 movie “Mr. Go,” also received around 20 billion won in investment last year from Chinese companies, including an affiliate of Wanda Group, before it was listed on the Kosdaq exchange.

The government-run Korea Creative Content Agency listed the spread of “red money” and resulting effects among the top trends to watch this year. It projected that increasing Chinese investment will not only make Chinese companies more influential here, but will make Chinese content become popular in Korea.

“The combination of Korea’s excellent labor, China’s funds and quality stories can boost the overall competitiveness of [Korea’s] creative content,” the agency said.

As of September, firms from mainland China and Hong Kong are estimated to have invested around 3 trillion won in around 30 Korean companies, according to the Small and Medium Business Administration. Seventeen of the 30 received investments to develop game or entertainment content, according to research by Sogang University.

The administration projected that more Chinese funds will flow into Korea as the Chinese government makes it easier for companies to invest and raises the maximum investment level.

“Korea should use this chance to secure its distribution network in China and ways to bring in funds so that both Korean and Chinese companies can [benefit],” he added.