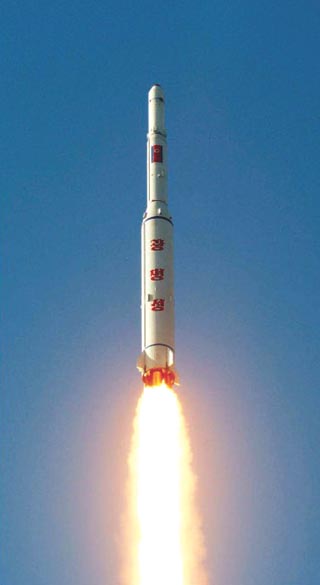 The state-run Rodong Sinmun reported Monday the launch of the Kwangmyongsong 4, a cover-up for the launch of a long-range ballistic missile. [RODONG SINMUN]

According to a diplomatic source, during a United Nations Security Council emergency meeting convened Sunday to condemn Pyongyang’s missile launch, China’s Ambassador to the United Nations Liu Jieyi said that sanctions had to be “limited” to issues “related to the development of weapons of mass destruction.”

This comes despite calls by Washington and Seoul for Beijing to take a firmer stance on enabling stronger, more effective sanctions on Pyongyang for carrying out a fourth nuclear test on Jan. 6.

In a special announcement later that day, Pyongyang’s official Korean Central Television declared that the regime had successfully launched into orbit its Kwangmyongsong-4 Earth observation satellite under the order of North Korean leader Kim Jong-un.

According to the Blue House, the president asked for Xi’s “active cooperation” in response to North Korea’s provocations in light of Beijing’s tendency to be resistant to stronger sanctions on Pyongyang.

However, Xi was said to have repeated China’s fundamental position.

According to the Chinese Foreign Ministry, the two agreed that nuclear weapons had no place on the Korean Peninsula and that war and chaos had to be prevented.

A Blue House official told the JoongAng Ilbo Tuesday, “President Park has determined that in regard to the special situation of North Korea’s provocations that she cannot just rely on China playing a role.”

And she held phone conversations with the U.S. and Japanese leaders again on Tuesday, two days after Pyongyang’s long-range missile launch, to discuss strong sanctions against the North.

Seoul, Washington and Tokyo have actively been bolstering their trilateral defense posture in response to North Korea’s continued nuclear and missile threat.

The Blue House said that Park and Obama had agreed that in addition to UN Security Council sanctions, they would also look into additional unilateral and multilateral sanctions to further pressure North Korea.

She had a similar conversation with Abe, who expressed support for Washington and Seoul’s announcement Sunday to formally open discussions on the deployment of the U.S.-led Terminal High Altitude Area Defense (Thaad) anti-ballistic missile system - a move Beijing strongly opposes.

On Sunday, Chinese Foreign Ministry spokeswoman Hua Chunying said in a statement that China “regrets that the DPRK [Democratic People’s Republic of Korea] insisted on using ballistic missile technology to carry out the launch in spite of the pervasive opposition of the international community.”

Hua also stuck to Beijing’s stance for dialogue and consultation, saying that it hopes “relevant parties” could “refrain from taking actions that may further escalate tensions on the Korean Peninsula.”

However, on the same day, Liu also lodged a complaint with South Korea’s top diplomat over Seoul and Washington’s announcement that they would begin discussions on the deployment of the Thaad system on the peninsula.

“The South Korean and Chinese governments have called its bilateral relations the best ever,” a diplomatic source in Beijing said, “but there is fundamentally a limitation to a China that doesn’t want the North Korean regime to collapse to be able to stand by South Korea’s side.”

Cai Jian, a Korean studies professor at Fudan University, added, “Because China perceives that it violates the country’s security interests, it is guarded against the deployment of the Thaad and the increase of U.S. military forces on the Korean Peninsula region.”

The state-run Xinhua News Agency ran an editorial Sunday that appeared to be a response to Washington’s insistence that China was key in resolving Pyongyang’s nuclear ambitions. “We hope the most important players to resolve the nuclear issue, North Korea and the United States, could come to a political agreement,” it read.

The Joint Chiefs of Staff of South Korea, the United States and Japan were scheduled to hold talks on Thursday over Pyongyang’s missile launch.

North Korea fired a rocket at around 9:30 a.m. from its Tongchang-ri launch site, which flew in a southerly direction from North Korea’s west coast, over the Yellow Sea.

It was detected by a radar system on the South Korean Aegis destroyer, Sejong the Great, a little over a minute later. The first stage detached over the Yellow Sea at 9:32 a.m., around 410 kilometers away from the launch pad. It exploded into around 270 pieces.

The fairing detached at 9:36 a.m., 791 meters away from Tongchang-ri, south of Jeju Island, and the second stage detached soon after, 2,380 kilometers again from the launch site into the Pacific Ocean.

The North’s official Korean Central Television declared some three hours later that the regime had successfully launched into orbit its Kwangmyongsong-4 Earth observation satellite at 9:09 a.m., Pyongyang time, which is 30 minutes behind Seoul. This was seen by the international community as a cover for a ballistic missile test.

The broadcast added that North Korean leader Kim Jong-un had ordered the launch of the Kwangmyongsong-4 on Saturday.

The South Korean Defense Ministry has collected some debris from the rocket launch that fell into the ocean.