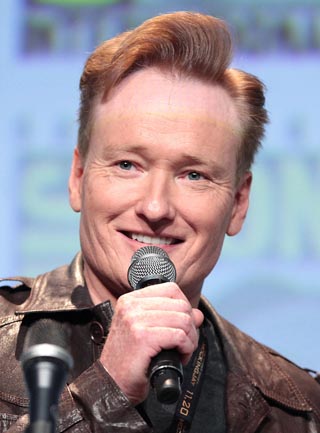 Conan O’Brien, host of the late-night talk show “Conan,” is visiting Korea on Sunday. O’Brien will be shooting an episode of his show during a five-day sojourn in the country.

O’Brien will be touring Panmunjom and the Korean Folk Village, where he will take part in various traditional Korean activities such as drinking soju and making kimchi. He is considering appearing on a few Korean TV shows as a guest.

On Monday, the second day of his trip, O’Brien is scheduled to spend time with about 200 fans.

With his former writing career as president of “The Harvard Lampoon,” O’Brien had been a writer for “Saturday Night Live” and “The Simpsons.”

After hosting “Late Night” and “The Tonight Show” for a combined 16 years, O’Brien started “Conan” in 2010.