An unrelenting wish for harmony

An unrelenting wish for harmony 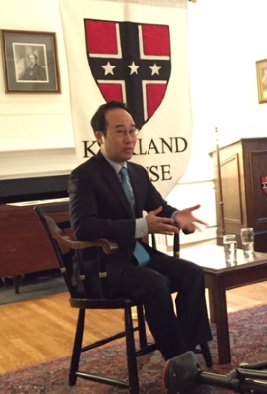 Violinist Won Hyung-joon talks about his efforts to hold a joint concert with South and North Korean musicians for the past eight years at Harvard University on Wednesday. [WON HYUNG-JOON]

Violinist Won Hyung-joon, who has been putting forth a ceaseless effort for the past eight years to bring South and North Korean musicians together to play in hopes of creating harmony between the two countries through music, has a curse.

Whenever he’s planning what he calls a “great mission,” North Korea suddenly commits an act of provocation toward the South. Then, the relationship between the two countries becomes more tense than ever, which makes Won’s supporters lose hope in the project and sometimes damages his confidence as well.

It happened when he was invited to give an address at the Oxford Union in 2013. It happened when he planned a concert at the demilitarized zone between South and North Korea last year to celebrate the 70th anniversary of Korea’s independence from Japan.

And it happened again, this time when he was carefully preparing three speeches during his visit to the United States that started on Wednesday at Harvard University. He will move on to Princeton University on Saturday and will be at the Boston Global Forum on Feb. 19 to talk about his life, music and his seven years of failed attempts to bring harmony to the Korean Peninsula.

Earlier this month, North Korea announced it was preparing to launch a long-range missile, and as Won’s flight took off, so did the missile.

Since then, already strained inter-Korean relations have become more tense, becoming a top news item not only in Korea but also in the United States, where Won will be speaking.

“Of course my heart sinks whenever this happens every time before I have some sort of a grand plan ahead - in my perspective that is,” said Won, who sat down with the Korea JoongAng Daily for an interview last week after the North announced its missile launch plans. “Because it really makes people who showed a little bit of interest in what I do just turn away and become skeptical that communication between South and North Korea will ever happen, not even through music.

“Skeptics say that even the West-Eastern Divan Orchestra doesn’t really mean anything when there’s still war going on in Syria,” Won said.

Won established the Lindenbaum Music Company in 2009 after being inspired by legendary conductor Daniel Barenboim, who founded the West-Eastern Divan Orchestra based in Spain that consists of musicians from Middle Eastern countries in hopes of promoting peace.

“But that’s not why Barenboim established the orchestra,” Won said. “Of course an orchestra can’t end a war and of course a joint orchestra between South and North Korea can’t bring unification.

“What we want to do, what I want to show as a musician, is that communication and harmony starts from listening,” he said. “When an orchestra goes on stage, the first thing they do is tune. An oboe plays a note, and rest of the musicians have to listen to that to tune their instruments. And not just at the beginning - they listen to each other’s notes throughout the piece to form harmony and not discord. That’s how it works and that’s what I want to show.”

On Wednesday, Won gave an hour-long talk at Harvard University’s Kirkland House residential hall for the program “Conversations with Kirkland.” He was invited by Harvard University student Joseph Choe, who made headlines last year for challenging Republican presidential candidate Donald Trump on his statements about defense relations between South Korea and the United States, as well as confronting Japanese Prime Minister Shinzo Abe about the Japanese military’s sexual enslavement of Korean women during World War II.

The talk was conducted in a question-and-answer style, hosted by Choe and John Park, an adjunct lecturer at Harvard’s Kennedy School of Government.

“I’m just so honored that I was invited to such an honorable event and that these people will come listen to me, someone who is not even a North Korean defector or anyone,” Won said. “I will just talk to them about what I have gone through these past eight years, how difficult it is to just play together, and ask for their support and continued interest.”

On Saturday, he will deliver a speech at Princeton as one of the guest speakers for the North Korean Human Rights Intercollegiate Conference, this year themed “Imagining Change in North Korea: Top Down or Bottom Up.” Won will be speaking after Suzanne Scholte, vice co-chair of the U.S. Committee for Human Rights in North Korea, and Victor Cha, former six-party talks U.S. delegation leader.

“When foreigners think about unification, they think about the unification between West and East Germany,” Won said. “But we are a little different. It’s difficult for us to have exchanges. We are banned from meeting each other, making phone calls and exchanging letters without government permission. North Korea doesn’t want to communicate. I first want to explain such a situation to the Americans.

“But we need to communicate in order to reach unification one day,” he continued. “When there is communication, we’ll have exchanges, and together with exchanges, we are building trust. And trust will one day will lead to unification.”

From Won’s perspective, “how to communicate” is what is missing at this point between South and North Korea, and as a musician, he said he wants to show how it works, even though it is a small act.

“Maybe it’s not curse after all,” Won said. “Maybe it is a sign that I have to continue working because there are no other means of communication and harmony between the two countries than music and art.

“We cannot communicate verbally when they are firing missiles and threatening the whole world,” he said. “But perhaps through music, we can.”