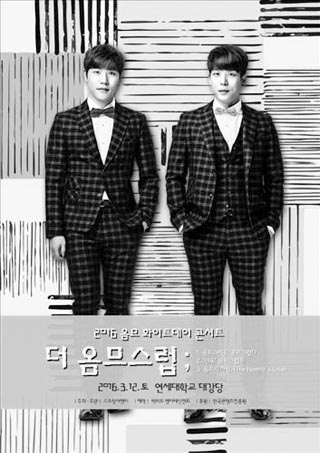 The male K-pop duo Homme will hold a concert on March 12 at the Grand Hall of Yonsei University in Sinchon-dong, western Seoul.
Big Hit Entertainment, the pair’s agency, said Wednesday that the performance will be held under the title “The Homme’s Love” to mark White Day.
White Day, which falls on March 14, is a day when women express their affection for their love interest by giving them sweets and gifts.
The agency added that the duo will sing various love songs.
Concert tickets are available on Interpark.
Homme consists of Lee Chang-min and Lee Hyun.
The two pursued their own singing careers until launching Homme in 2010. Lee Chang-min belongs to the K-pop quartet 2AM, while Lee Hyun sometimes performs as a solo artist.
Their hit songs include “I Was Able to Eat Well” and “It Girl.”
Partial ‘Real Men’ lineup unveiled
“Real Men,” the popular reality TV show on MBC, has unveiled part of its lineup for the program’s upcoming special season, which will have female celebrities experience life in the Army.
According to MBC, the cast so far includes Cao Lu, a Chinese member of K-pop group Fiestar; Dahyun of Twice; Nana of After School; and actress Kong Hyun-joo.
Other performers will be announced later.
The featured stars will reportedly join the Korea Armed Forces Nursing Academy later this month, with episodes to hit the air in early March.
“Real Men” originally featured male celebrities, but began to include female entertainers in August 2014. Appearances in the first season by Hyeri, a member of K-pop group Girl’s Day, and actress La Mi-ran received favorable reviews from fans.
Both ladies soared to stardom via the show. Since then, the female version of “Real Men” has become a catalyst for a number of lesser-known celebrities.
The show airs on MBC every Sunday at 4:50 p.m.
By Sung So-young