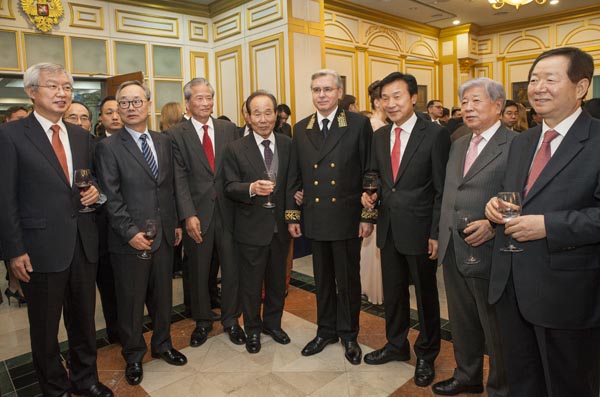 Russian Ambassador to Seoul Alexander Timonin, fourth from right, marks Diplomatic Service Day on Thursday during a reception at the embassy in central Seoul. The event was attended by diplomats, Korean government officials, lawmakers and cultural leaders. [PARK SANG-MOON]

Russian Ambassador to Seoul Alexander Timonin warned Thursday that it was “impossible” to resolve the denuclearization problem should the U.S.-led Terminal High Altitude Area Defense (Thaad) antiballistic missile system be deployed on the Korean Peninsula.

“The principal position of Russia is that the nuclear status of the DPRK [Democratic People’s Republic of Korea] is unacceptable for us,” Timonin said, in reference to Pyongyang’s fourth nuclear test last month and long-range missile launch on Feb. 7.

“At the same time, we consider it impossible to achieve the settlement of nuclear and other problems on the Korean Peninsula by way of deploying the American antiballistic missile system Thaad in the Republic of Korea,” he said.

The top Russian envoy’s remarks were included in his speech at a celebration intended to mark Russia’s Diplomatic Service Day, which was attended by diplomats, Korean government officials, lawmakers and cultural leaders at the embassy in central Seoul.

His words come after Washington and Seoul on Feb. 7, following North Korea’s long-range missile launch, announced plans to begin formal consultations on the deployment of a Thaad battery in South Korea, a move Moscow and Beijing have opposed.

The placement of a Thaad battery in Korea has proven controversial because it comes with a radar system that can cover more than 1,000 kilometers (620 miles). Both China and Russia insist that it goes against their security interests and fear it may be used as a method of surveillance against them.

Timonin continued that the long-stalled six-party talks “remain as the optimum format of searching for ways out of the current crisis,” adding that there is no other alternative.

The six-party talks were originally formed with the two Koreas, Japan, Russia, China and the United States, with the aim of convincing Pyongyang to abandon its nuclear ambitions and resolve security concerns on the peninsula. The talks have been suspended since 2008, however, when North Korea pulled out of negotiations.

After North Korea’s fourth nuclear test on Jan. 6, President Park Geun-hye proposed five-way talks without Pyongyang to help coordination among the other countries involved in denuclearization talks. Moscow and Beijing rejected the idea.