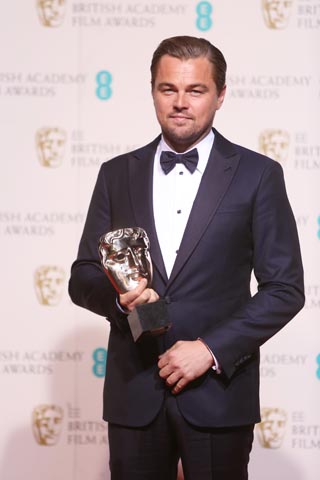 Actor Leonardo DiCaprio holds his Best Actor award for his role in the film “The Revenant” backstage at the 2016 Bafta film awards at the Royal Opera House in London on Sunday. [AP/NEWSIS]

Leonardo DiCaprio cemented his Oscar-favorite status by taking the best-actor trophy for playing a bear-battling fur trapper in a brutally wild American West. Alejandro G. Inarritu was named best director for what he called a “human and tender story,” and “The Revenant” also won prizes for cinematography and sound.

DiCaprio, who has been nominated three times before at the British awards without winning, said in his acceptance speech that he was “absolutely humbled” to beat “The Martian” star Matt Damon, Michael Fassbender for “Steve Jobs,” and Eddie Redmayne for “The Danish Girl.”

He cited the influence on his work of British actors including Tom Courtney, Peter O’Toole, Daniel Day Lewis and his “Revenant” co-star Tom Hardy, and sent thanks and greetings to his mother, whose birthday fell on Sunday.

The British awards, known as the Baftas, are considered a portent of success at Hollywood’s Feb. 28 Academy Awards. “The Revenant” has earned DiCaprio his sixth Oscar nomination - and, many believe, his best shot at finally winning.

DiCaprio said it was out of his hands, but expressed pride in what he called “not just a film, but an epic journey we all went on.”

“We put our heart and soul into this movie ... It’s up to the world now and voters to decide,” he said at a post-ceremony news conference.

The best-actress trophy went to Brie Larson as a mother trying to shield her son from a terrible reality in “Room.” She won out over Alicia Vikander for “The Danish Girl,” Cate Blanchett for “Carol,” Maggie Smith for “The Lady in the Van” and Saoirse Ronan for “Brooklyn.”

Winslet dedicated the prize to “all those young women who doubt themselves,” recalling that she once had been told to go for “the fat-girl parts.”