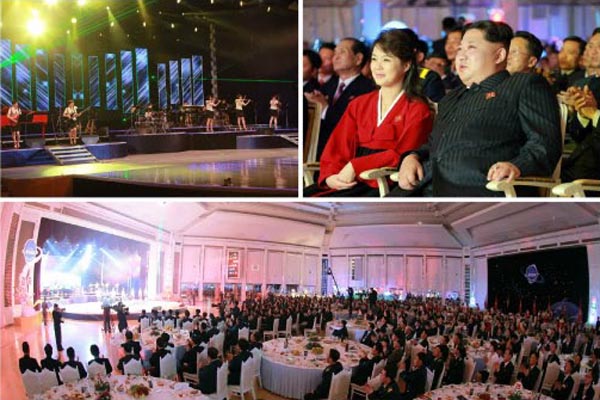 To celebrate the country’s “successful” launch of a satellite, North Korean leader Kim Jong-un, top right, held a banquet on Saturday with a performance by the North’s pop girl group Moranbong Band, top left, and praised the scientists, technicians and officials who were involved in the launch, the North’s Korean Central News Agency (KCNA) reported Monday. The Saturday banquet was attended by the leader’s wife, Ri Sol-ju, who was seen in public for the first time in 119 days; top military aide Hwang Pyong-so; and Kim Yong-nam, president of the Presidium of the Supreme People’s Assembly. [RODONG SINMUN]

North Korean leader Kim Jong-un ordered a push for more satellite launches, as the confrontation between the two rival Koreas continues to deepen.

And over the weekend the North’s senior military officials threatened war against the isolated country’s enemies, Seoul and Washington, which are preparing for their biggest-ever joint military drills next month.

North Korea on Feb. 7 launched what it said was an Earth observation satellite aboard a rocket, the Kwangmyongsong, and put a satellite into orbit about nine minutes after takeoff. Seoul, Washington and others viewed it as a cover for developing intercontinental ballistic missile technology.

To celebrate the country’s “successful” launch of the satellite, Kim held a banquet on Saturday with a performance of the North’s version of a pop girl group, Moranbong Band. He also praised the scientists, technicians and officials who were involved in the launch, the North’s Korean Central News Agency (KCNA) reported Monday.

The leader said in a congratulatory speech that his people “dealt a telling blow to the enemies seeking to block the advance of our country,” referring to Seoul and Washington.

He said the decision to launch the satellite came out of the complex geopolitical situation, in which “the hostile forces were getting evermore frantic to suffocate the DPRK.” DPRK is short for the Democratic People’s Republic of Korea, the official name of North Korea.

The Saturday banquet was attended by the leader’s wife, Ri Sol-ju, who was seen in public for the first time in 119 days; top military aide Hwang Pyong-so; and Kim Yong-nam, president of the Presidium of the Supreme People’s Assembly.

Ahead of the late leader Kim Jong-il’s birthday today, the bellicose North’s senior military officials made provocative remarks over the weekend, threatening the South and declaring their loyalty to the 33-year-old leader.

Hwang Pyong-so, the head of the North Korean army’s General Political Bureau, vowed to mercilessly strike and damage enemy bases if the enemy tries to infringe on the state’s sovereignty.

He made the remarks at a military ceremony Sunday pledging fidelity to Kim Jong-il, the father of leader Kim Jong-un.

Pak Yong-sik, chief of the Ministry of the People’s Armed Forces, on Friday also made harsh remarks against the United States and its allies, saying he would destroy any enemy that threatens the North’s sovereignty.

According to the KCNA report of the ceremony, Ri Myong-su, a missile expert who used to work as a director at the North Korean Army’s general staff and a chief of the Ministry of People’s Security, was called after Hwang and Pak, suggesting he has been designated as a successor to Ri Yong-gil, who was ranked third in the North’s hierarchy but was executed this month on corruption charges.

An official at the South’s Ministry of Unification acknowledged on Monday that Ri Myong-su was appointed as the chief of the General Staff of the Korean People’s Army of North to replace Ri Yong-gil.

While North Korea’s ceaseless quest to acquire the ability to fire a nuclear-armed missile is aggravating the already-strained ties between the rival Koreas, the joint military drills between South Korea and the United States scheduled for next month will be the biggest such exercise ever.

South Korean Defense Minister Han Min-koo said Monday at a hearing before the National Defense Committee that the U.S. participation in the joint drills will be of “an epoch-making” size, sending more than 5,000 U.S. soldiers and deploying high-tech military assets to show off its deterrent power.

The Joint Chiefs of Staff of South Korea had said earlier that the United States will dispatch the largest number of armed forces, including the USS John C. Stennis, a Nimitz-class nuclear-powered supercarrier, along with nuclear-capable B-52 and B-2 bombers.

There are currently 96 Patriot Advanced Capability-2 missiles and the more advanced PAC-3 Patriot missiles deployed at the Osan Air Base in Gyeonggi.

The two allies will carry out the annual joint military drills from March 7 to April 30 and in two phases: Key Resolve and Foal Eagle. During the regular exercises, North Korea protests and deems them a rehearsal for war.

Tensions on the Korean Peninsula are likely to keep rising ahead of the drills, as the standoff between the two Koreas continues without plans for a meeting or conversation in search of a breakthrough.

As of now, the North has seized the last remaining joint project between the two countries, the Kaesong Industrial Complex, and kicked out all South Koreans last week, as well as cutting military hotlines and communication lines after the South shut down the complex on Wednesday.