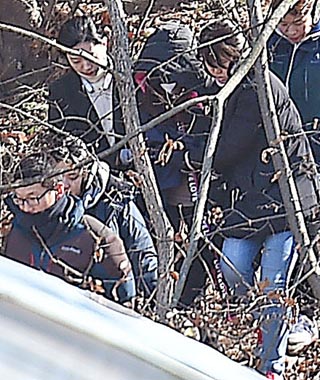 Police on Monday take the suspect, surnamed Park, and two accomplices to the scene of the crime in an attempt to locate the body of Park’s daughter. [NEWSIS]

Authorities on Monday uncovered the body of a young girl buried more than four years ago allegedly by her mother on a mountain in Gwangju, Gyeonggi.

The mother of the child, who was just 7 years old at the time of her death, told police on Feb. 5, that she had physically abused her daughter and later hid the body with the help of three accomplices after she found the girl dead one day in October 2011.

Police arrested the woman, surnamed Park, on Jan. 28 over suspicions that she violated the Child Welfare Act. She was charged with manslaughter on Feb. 6.

This is the third child murder case uncovered so far in an ongoing police investigation into 220 children who have gone missing from school for unknown reasons.

The investigation was sparked after an 11-year-old Incheon girl was found in December to have been held captive and starved for two years by her parents.

The probe has since unveiled additional grisly cases of child abuse.

Last month, the police discovered the body of a young boy in the freezer in his parent’s home. And on Feb. 2, the mummified body of a girl, neglected for nearly a year, was found at her parent’s house.

The South Gyeongsang Police Precinct said Monday that Park, 42, had hit her daughter with a wooden stick for 30 minutes on Oct. 26, 2011, to discipline her for ruining furniture and clothes in the house.

Park went to work and came home in the afternoon, when she allegedly found her dead.

“I did not have good feelings toward my first daughter, because she reminded me of her father too often,” Park told police.

The time of the girl’s death remains uncertain, though police said she likely died before Park returned home on Oct. 26. The mother did not call an ambulance or the police and later buried the body in secret.

Her accomplices reportedly agreed to keep the death a secret when Park asked them who would be there to raise her younger daughter if she were arrested.

Park, Baek, Lee, and Lee’s sister drove for two days with the corpse to find a place to bury it. In a mountain in Gwangju, Gyeonggi, the four dug a shallow grave using shovels and hoes.

They then stripped the girl of her clothes and buried her sometime between the late night hours on Oct. 28 and early dawn on Oct. 29.

Police are investigating the cause of death and have not ruled out that the girl was starved.

Park is reported to have left her husband in January 2009, taking their two daughters with her to live with Baek in Lee’s five-room 236-square-meter (2,540 square-foot) apartment in Yongin, Gyeonggi. Baek and Park were college friends.

Park’s husband filed for divorce in 2010 when he could not get in touch with his wife and children. He then registered the address of their children to Goseong, South Gyeongsang, in 2013.

Police received a request for investigation from the South Gyeongsang Education Office on the whereabouts of the family’s younger daughter and visited the husband’s home in Goseong on Jan. 19.

When they could not locate her, they started the probe.

Police found Park on Jan. 28 at a dormitory for factory workers in Cheonan, South Chungcheong. After burying her daughter in 2011, Park moved out of Lee’s apartment and worked at a sauna in Cheonan, and then at a rice wine factory until last month.

Her younger daughter, now 9 years old, was taken into the care of child protective services in Changwon, South Gyeongsang.

Police said they plan to further question Park and her accomplices.