Eagles slugger soars ahead of Korean athletes on pay day

Eagles slugger soars ahead of Korean athletes on pay day 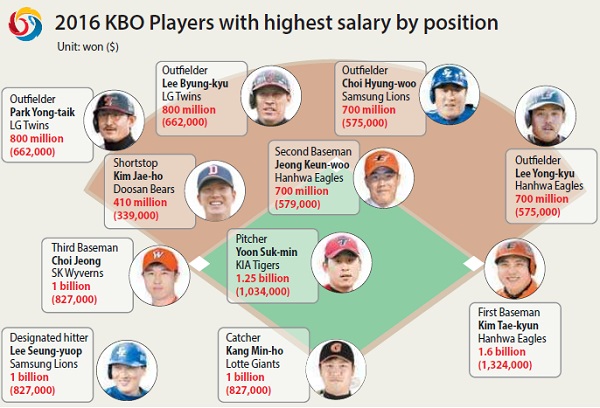 According to the KBO figures released on Feb. 11, Kim is the country’s highest pro baseball player for the fifth straight year. This is the highest annual salary among the 526 registered players, excluding rookies and foreign players. His salary also makes him the highest paid Korean national pro athlete in any sport in Korea.

In football, Lee Dong-gook of Jeonbuk Hyundai Motors has the highest salary with 1.1 billion won. The highest-paid player in basketball is Seoul Samsung Thunders’ Moon Tae-young, who makes 800 million won. In Volleyball, the Korean Air Jumbos’ setter Han Sun-soo ranks at the top of the list with 500 million won. 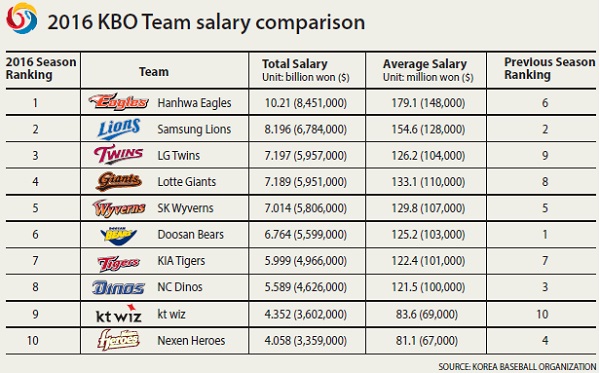 Transferring to the Eagles as a Free Agent, Jeong’s salary tripled from 400 million won last year with the SK Wyverns. Jeong’s raise broke the KBO record in salary increases, which previously stood at 680 million won.

The top earner among foreign players is the Eagles’ right-hand pitcher Esmil Rogers, from the Dominican Republic, with 2.28 billion won.

Comparing players by position, excluding imports, Yoon of the Tigers tops the list as a pitcher and Lotte Giants’ Kang Min-ho as a catcher with a 1 billion won annual salary.

As a first baseman, Kim has the highest take-home pay. Jeong Keun-woo of the Eagles with 700 million won and Choi Jeong of the Wyverns with 1 billion won are the highest paid second and third basemen.

The top earning shortstop is Kim Jae-ho of Doosan Bears who is cashing in 410 million won this year. The honor for the outfielder position goes to Park Yong-taik and Lee Byung-kyu duo from the LG Twins with a 800 million won paycheck. Lee Seung-yeop makes more than any other designated hitters with 1 billion won annual pay.

In terms of the total salary by teams, the Eagles top the list. They went on a FA hiring spree in the past three years and their players’ salary for 2016 totals to 10.21 billion won. The team’s average salary for players is also the highest at 179.12 million won.

The total KBO League salary this year amounts to 66.56 billion won while the average salary among the 526 registered players is 126.56 million won. Since the KBO’s first establishment in 1982, the average annual salary has increased almost tenfold.