BOK continues to hold the interest rate at 1.5%

BOK continues to hold the interest rate at 1.5% 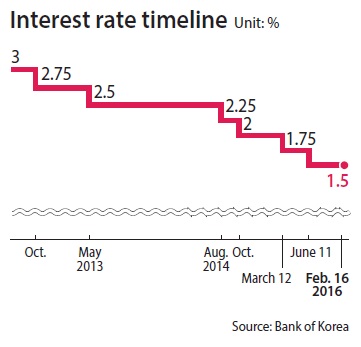 Amid growing uncertainty in global and domestic economies, the Bank of Korea (BOK) on Tuesday froze the interest rate for the eighth consecutive month at 1.5 percent.

Although the Bank of Korea governor took a hawkish stance and tried to downplay the possibility of an additional rate cut, financial insiders are already betting on additional cuts in future meetings as volatile conditions make both the Korean and world economies critically vulnerable.

The monetary easing taken up by other major economies including Europe and Japan, which adopted a negative interest rate, has been adding pressure on the BOK to take similar action.

Gov. Lee Ju-yeol acknowledged that the central bank still has room to adjust the monetary policy rate and said he understands claims that such action is necessary to bolster the economy while raising inflation expectations. However, he said it is too much of a risk to resort to a similar monetary policy when uncertainties are running high.

“The key interest rate is at 1.5 percent, which we believe is the lowest limit. But it is not as though we have no more room for policy adjustment,” Lee said. “However, under the current situation where external volatility is extremely high, we are uncertain if the positive effects will work while there are risks of side effects.”

Responding to the action taken in Japan, he said, “When you look at the policy interest rate adoption in Japan, the situation is not going in the intended direction,” Lee said. “The goal was to boost the economy through the weakening of the yen. But because the uncertainty and insecurity is so big, it couldn’t work properly as it should.

“I’m not saying that an interest rate cut would certainly bring about side effects, but I am saying the intended effect is uncertain.”

Some market experts have shown concerns that a rate cut in Korea could actually cause foreign investors to seek a more lucrative market.

“Considering the domestic circumstances, it is right to cut the rate, but looking at the overseas risks, it is right not to change it,” said Kim Seong-tae at the Korea Development Institute.

It was evident that among the seven-member monetary policy committee, there were some who disagreed with the recent decision.

One of the members, Ha Sung-keun, proposed a 0.25 percentage point cut at the meeting. The bond market, as well as the foreign exchange market, picked up the one vote that favored a cut.

The interest rate on three-year Treasuries fell to 1.43 percent compared to the previous day, while the won saw its value fall.